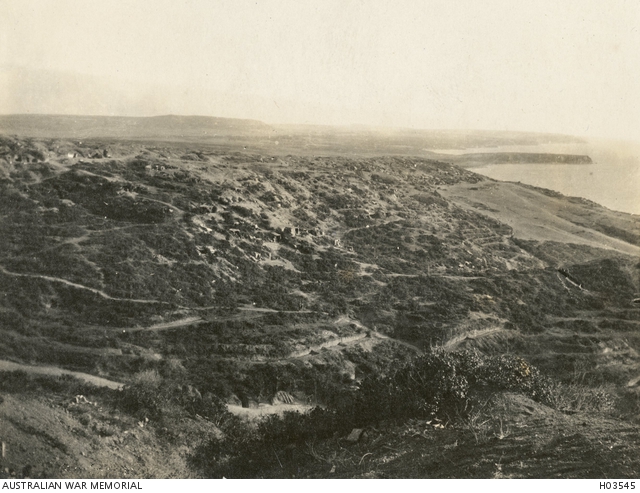 Looking south towards the coast from artillery positions on the heights of Gallipoli, between
Brown's Dip and Macay's Hill, towards Lone Pine, 2nd September 1915 - the same area
systematically bombarded by the Turks, & defended by the 7th Battery (below).
[Courtesy of Australian War Memorial - H03545]

A cool breeze blowing but I am not feeling too well.  Stomach trouble again.

07.20 to 07.45 No. 4 gun fired 7 rds P.S. at slope + crest of PLATEAU 400, N. end of SURPRISE GULLY in retaliation of gun firing on our trenches at LONESOME PINE.  Ranges 915x to 950.  Effect – Parapets + overhead cover partially destroyed.  Enemy’s fire at LONESOME PINE and at No. 4 gun ceased at 07.45 probably owing to our aeroplane appearing over Turkish lines.  Observers reported considerable movement of troops on MAIDOS - KRITHIA road during the morning.