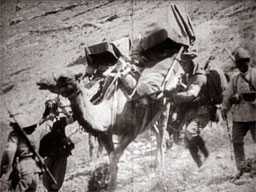 A Turkish Army camel, laden with supplies - a number were
spotted by the 7th Battery (below).
[Courtesy of fravahr.org]

Went again to Ordnance. Had busy day getting goods and etc and later on when mules brought parcels up I issued to those required.

0830 to 0845 and 0940 No 3 gun fired 16 rds P.S. at above targets in retaliation for Turkish gun firing on LONESOME PINE causing further damage to parapets.