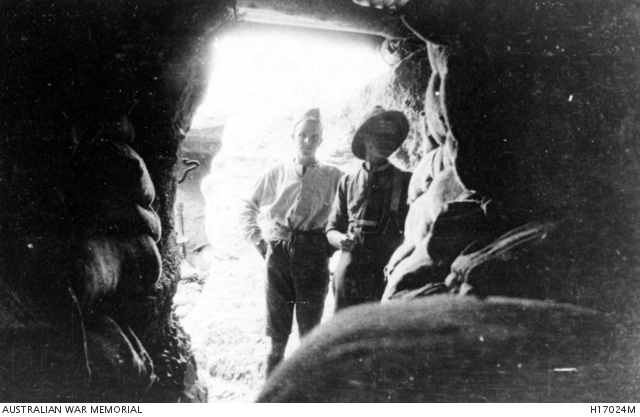 Ray Noel (left) and Roy Yelland (right) of the 1st Australian Division Signal Company,
in a section of Lone Pine - as per the signalling letter referred to by Major Hughes below,
in Appendix 2 of the 7th Battery Unit Diary, signallers played a major role in directing
artillery fire on adjoining Turkish positions at Lone Pine.
[Courtesy of Australian War Memorial - H17024M]

Very keen & cool – windy. A number of our men due to go away for a spell for a few weeks.

18.35 No 3 gun fired 3 rds P.S. at range of 915x at overhead cover on slope of PLATEAU 400, N. end of SURPRISE GULLY.  Position was stated by Divl. Observer to be a Turkish Observing Station.  Overhead cover was considerably damaged.

[Author's Note: The below is found in the 7th Battery Unit diary,
designated Appendix 2, as referred to by Major Hughes above]

In accordance with your telephone message this morning, I have to request you to please arrange - should fire be urgently required by LONE PINE - to make the following signals to this battery :-

Another North Queensland volunteer returning from the Dardanelles arrived by the Cooma on Friday from south. This is Gunner J. H. Dale, of Barringha, who is returning invalided, having contracted rheumatic fever, whilst he is also suffering from a strain to the heart. Gunner Dale met his wife and two little boys at the railway station on Friday morning, it being over a year since he had last seen them. The returned soldier, before he came to Australia, had 12 years' service in the British Army and four years in the reserve. He had finished his term in the reserve before the present war broke out, and was employed as a lengthsman on the Great Northern railway, whilst Mrs Dale was gate-keeper at Barringha. A few weeks after the war commenced he volunteered at Townsville, and going away with the first contingent, was in the 7th Field Battery, which landed at Gallipoli on April 6.

As showing the nature of the country, Gunner Dale stated that it took about 60 men and eight horses to drag an 18lb. quick-firing gun into the positions selected. He had nine weeks in the trenches before being invalided. Portion of that time, Gunner Dale stated, he was attached to the A.M.C. as stretcher-bearer. He saw a good deal of the Australians, especially the 9th battalion, and was proud of the boys he was fighting alongside. Though an Imperial service man himself, Gunner Dale said he would not want to serve with better soldiers than the "kangaroos" were proving themselves to be.

Gunner Dale walks somewhat feebly, and is still suffering from rheumatics. The most serious feature of his illness, however, is the heart strain, which will prevent him taking on heavy work again. Gunner Dale wears on his shoulder the red and blue, the distinguishing color of the artillery, the proud boast of that arm being that their colors "never run."


As published in the Townsville Daily Bulletin, 21st October 1915.
[Courtesy of National Library of Australia - TROVE]