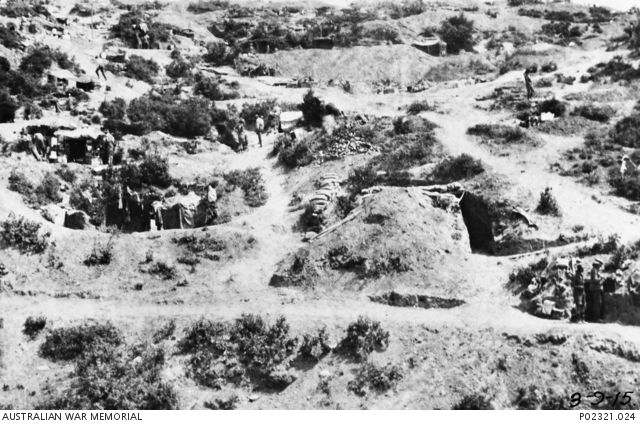 Dugouts of the 10th Infantry Battalion, in Victoria Gully, just behind & to the left of
the 7th Battery's guns, on the 3rd September 1915.  A path runs down the gully (right)
past the Regimental Aid Post in the foreground, with Artillery Road near the top of
the hill in the background.
[Courtesy of Australian War Memorial - P02321.024]


The weather nice & crisp with a cool breeze. Getting the store rebuilt a little in case of Winter protection – a quiet day. Went to Ordnance for clothing etc.

1800 Observers reported party of enemy working on what appeared to be a revolving turret emplacement on slope of GUN RIDGE Sq 68-V-5,6.  Spot was kept under observation by an officer who saw embrasure of emplacement revolving as though on a pivot.