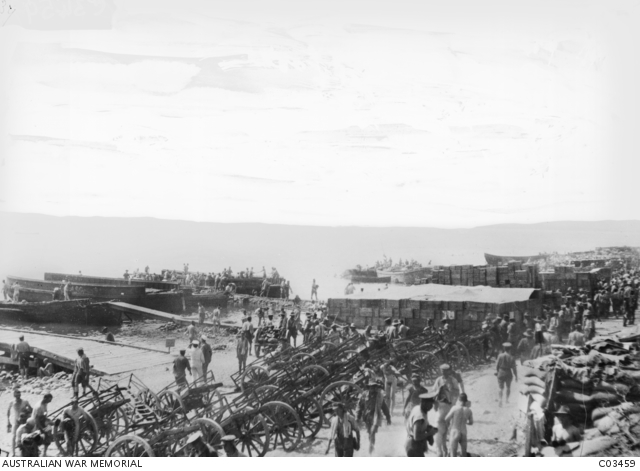 "Bathers coming ashore in barges at Anzac Cove, to seek shelter from 'Beachy Bill'" - on
the 13th of September 1915, 'Beachy Bill' was particularly active from the Olive Grove,
despite having been mostly absent in previous weeks.
[Courtesy of Australian War Memorial - C03459]

Our men did not leave as anticipated but came back early in the evening very disappointed. I had a lot of trouble to fix up extra rations for them as they were off our strength. “Beachy Bill" our old friend sent a lot of shells over towards the beach to-day.

10.15 Party of Turks observed working at Sq 55-K-5.  Appeared to be commencing a new line of trenches.  Reported to 9th Battery and engaged them.

[Authors' note: Unfortunately, a large gap exists in the 3rd Field Artillery
Brigade's official diary, covering almost the entire month of September
1915 - as such, Major Hughes' documented command of the 3rd Field
Artillery Brigade does not properly take effect until the 1st October 1915]