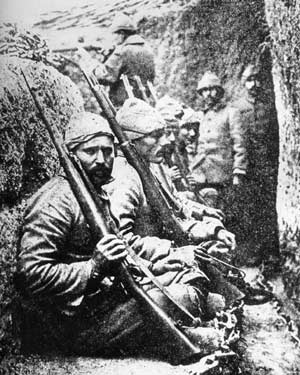 17.15 to 17.45 Turkish gun commenced firing at LONESOME PINE and shortly afterwards about over 50 bayonets were visible behind parapets ("Battlements") on crest of PLATEAU 400 at N. end of SURPRISE GULLY (Sq. 68-b-6).  No. 3 gun fired 25 rds P.S. at ranges of 960x to 940x, destroying the greater portion of the parapets behind which bayonets were showing.  Bayonets soon disappeared and it is considered that good effect was obtained on personnel behind parapets.  Heavy rifle fire could be heard on left flank, + as Turks (Sq 68-b-6) did not leave show themselves above parapets + were firing most of the time into the air it is considered they were only making a demonstration.