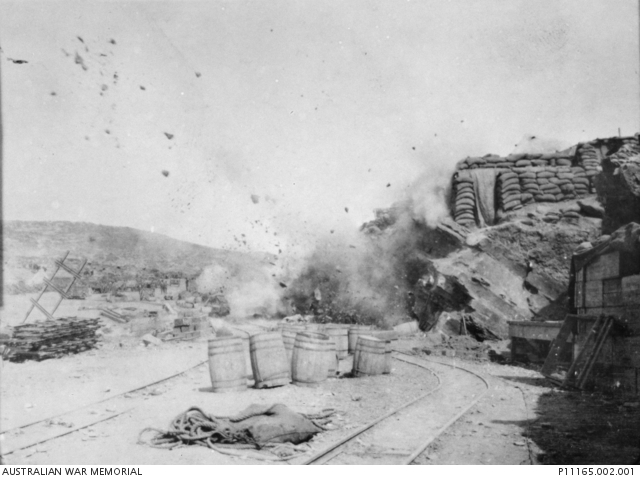 "A Turkish high explosive shell bursting alongside a dugout. The officer who took this wasted
quite a number of films trying to get a burst and this is his best.  'A nasty one' (A lucky snap).
The burst of a Turkish High Exxplosive 8.2 inch shell alongside a dugout and right amongst
our stores at Suvla. Note the tramway rails blown on end" (Original inscription). Taken in
September 1915, this image is from the second of two albums relating to the service of
Lieutenant Commander Leighton Seymour Bracegirdle RAN (later Commander, DSO),
Officer Commanding the 1st Royal Australian Naval Bridging Train at Gallipoli.
[Courtesy of Australian War Memorial - P11165.002.001]

A little sultry. The Turkish Artillery opened up on us about 5 o’clock and made it warm for about half an hour. Our guns replied and the bursts and crash was deafening. One of our men named Gnr Turner a recent transfer from the Ammunition Column was hit in the legs and several L Horse men just near my store were wounded 2 of them died about an hour after. One shrapnel shell burst about 190 yds from my dug out door & a shower of bullets scattered over a space of a ¼ acre.