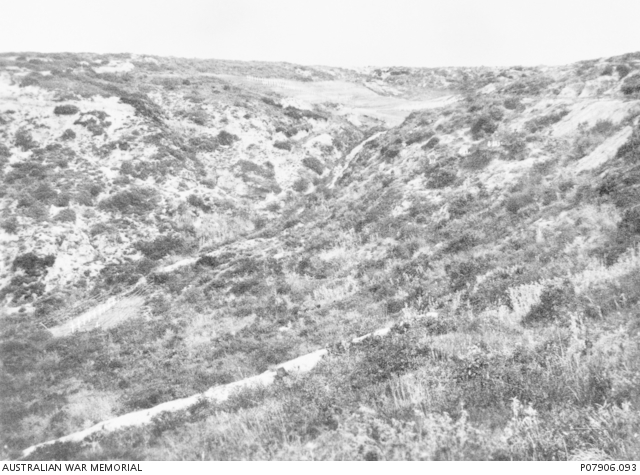 A view of Brown's Dip and Victoria Gully (above which the 7th Battery guns were
located), looking north from Turkey Knoll, which came under fire from Turkish guns
on the 24th September -  this photo is one of a series taken on Gallipoli by the
Australian War Records Section, 1919.
[Courtesy of Australian War Memorial - P07906.093]

Weather still keen. There is an absence of the short Pants now. Everyone is commencing to cover themselves up a little more. The wind is the worst part of the weather – it is so cutting just now. I made an appeal to Supply O.C. about bread & in future our Battery is to be treated similar to the Infantry Brigades etc.

10.45 Smoke from enemy gun firing from 68-V-6 observed.  Was either howitzer or gun of low velocity as shell could be observed in flight near muzzle of gun.  Engaged by 9th Bty + Heavy Bty.