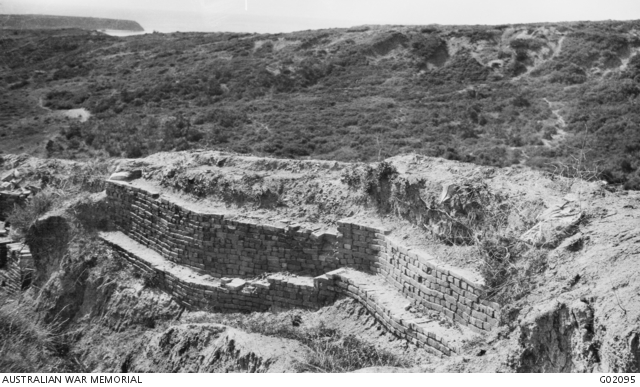 The Turkish trenches on Sniper's Ridge, showing the unstable ground heavily reinforced
with a mud brick retaining wall, which the 7th Battery guns repeatedly demolished
(below) - one a series of photographs taken on the Gallipoli Peninsula under the direction
of Captain C. E. W. Bean of the Australian Historical Mission, during the months of
February and March, 1919.
[Courtesy of Australian War Memorial - G02095]

I had a quiet day. In the evening there was a very heavy bombardment taking place both on our right & on our left. The sky was lit with the bursting of the shells & the searchlights from the man-o-war vessels. Towards midnight one of the enemy’s Taubes flew over our lines very low and dropped some bombs happily for us without any serious effect.