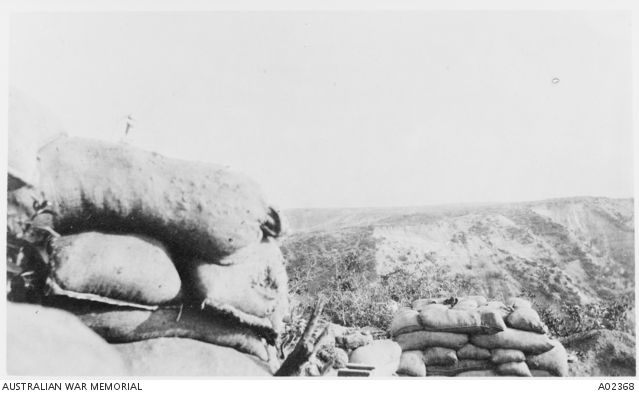 The view from the emplacements on Rosenthal Ridge, across to Kilid Bahr - Observers
watched on as crops were harvested by the Turks along the position in the distance (below).
[Courtesy of Australian War Memorial - A02368]

A windy day but cool. My store had a calamity the side wall fell over. It was heaped up sand bags – luckily no one was near it. The work of building it up was no small one. I went along to Headquarters to try & see Jack Fitz but he had not arrived yet. There was a good deal of shelling to-day.

1630 No. 3 gun fired 9 rds P.S. at parapets on Crest of PLATEAU 400 at N. end of SURPRISE GULLY at a range of 950x in retaliation to Turkish gun firing on LONESOME PINE.  A large portion of parapet from behind which enemy were observed to be sniping was demolished + sniping stopped.  Observers reported that crops are still being harvested on flats at foot of KILID BAHR + that small parties of Turks are still entrenching on GUN RIDGE.  It has also been noticed that a parapet has been erected at the Southern end of trench east of SNIPERS RIDGE, Sq 68-b-6, as protection against enfilade fire from No. 3 gun.

[Author's Note: The below is found in the 7th Battery Unit diary,
designated Appendix 1, as refferred to by Major Hughes above]

The number of officers who have been at Anzac since 25/4/15 or who have served continuously at Anzac for over three months is NIL.

The following men have been recommended for rest by the M.O. :-

It will be impossible however to relieve all these men at the same time as they include non-coms + layers.

Our sporting contributor has received the following letter from Driver J. McKenzie, of the 7th battery, Australian Field Artillery :-

Zariah Camp, near Alexandria, Egypt, September 10, 1915. - I am in Zariah Camp at the present time, with horses, as our battery, the 7th, are in action at Anzac, and have been there since that memorable landing on the 25th of April. I was up at the Dardanelles, and was to be one of the first to go ashore with horses, in our battery from Queensland, being the senior battery of the 3rd Brigade, were to send their horses (leaders and wheelers only) ashore, to take the guns and waggons up to support the infantry; but, unfortunately, shells began to drop near our transport, and we were ordered to get up anchor, and get out, to save being sunk. It is not much good for me to go into details about our doings there, as you know most of the news from Ipswich-folks, who are up on the peninsula. Regarding the Queensland artillery, it has kept up the reputation that it made at Mena during the maneouvres, both in gunnery and line discipline. I don't know if you heard that the 7th battery, under Major Hughes, came out on top in several actual firing tests before we left for the Dardanelles. No doubt you are aware that our casualties are very heavy, and although we sometimes grumble at being kept here with horses we can consider ourselves very lucky, although I think every man here would be over there if he could get. I may state that one or two have gone over independently without being sent, but they only get punished for it afterwards, as there must be discipline when there are so many lives at stake. The horses may be wanted any time now - in fact, the authorities did manage to land some, but, on account of insufficient cover and water, they all had to come back with us to Egypt till they can advance. I met Mr. Hall, the chemist, from Ipswich, in Alexandria, the other evening. He is here trying to regain what he lost on the Peninsula, during the first few weeks - health and vitality. He has a good word for Lieut. Roberts, so have all the Roberts' Company I have met here, wounded. They cannot give him enough praise for his daring courage and skill. They all say he died as he lived - an officer and a gentleman. Your son is in camp here, also Norman Tlosts and D. Donohue, from North Ipswich - all keeping well, but a bit downhearted, like myself, at being stuck here with the artillery horses. I must congratulate the Ipswich soccer players (I notice G. Burns is amongst them), who went down South with the Queensland team, on their display at Wollongong, against the pick of the South Coast of New South Wales, but at the same time I can tell you I would sooner see them trying to get an International Medal "Queensland, against German Brutality," for they would be doing the British Empire, also the world, a good turn, then. I wish you all my old Ipswich friends the best of times. Hard lines for Sharp, Bundanba, and Cassidy, of North Ipswich, both wounded.

As published in the Queensland Times, 21st October 1915.
[Courtesy of National Library of Australia - TROVE]