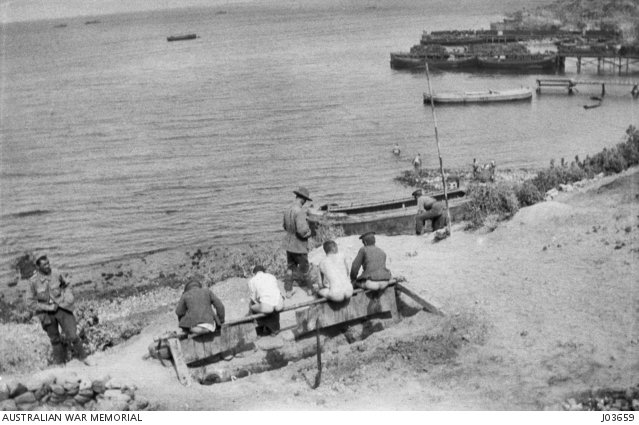 Navigating the latrines (or 'the rear') on Gallipoli would have been hairy, especially
at night with a bad belly, as Will Sparkes had to do below.
[Courtesy of Australian War Memorial - J03659]

There was a decided change last night & I felt the chill of the air as I had to unceremoniously leave my bed for the rear. It was about midnight at the time & I had five others to keep me company when I arrived there. It shows the state of the health of our lads just now.

All day it blew a strong Nor’ Westerly and cold with it & plenty of dust. I had several trips to for timber etc to Stores.

0920 Sandbag parapets + earthworks on slope of PLATEAU 400 at N. end of SURPRISE GULLY, Square 68-b-6 engaged by No. 4 gun in retaliation to enemy’s gun shelling our trenches in that vicinity. 12 rds P.S. were fired at range of 915x damaging parapets.  Fire of 2 Turkish guns drawn on No. 4 gun, but no damage was done as fire was not frontal + was consequently struck parapets.

18.40 No. 4 gun partially demolished parapets + earthworks abovementioned in retaliation to enemy’s gun shelling our trenches in that vicinity.  4 rds H.E. + 9 rds P.S. were fired at ranges varying from 950x to 920x.