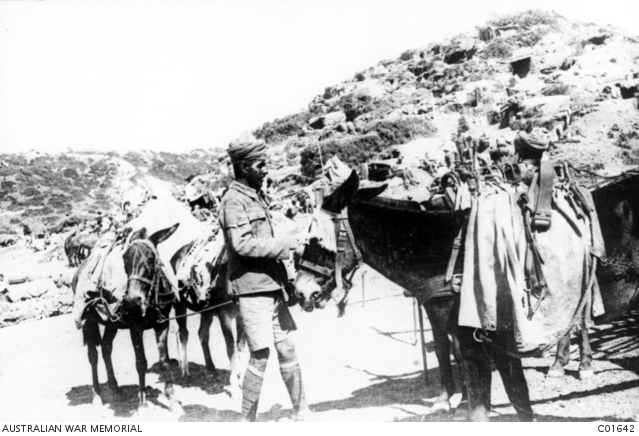 An Indian muleteer and his animals on the Gallipoli Peninsula, with fly veils fitted
to the mules to combat the flying insect onslaught (mentioned below).
[Courtesy of Australian War Memorial - C01642]

Went to Ordnance. It was warm to-day – Well the flies know it. They seem to come from nowhere as while we had the cold spell you could not see any about. Now they are in droves & how they cling. I think the Turks must have given them instructions. In the afternoon one of our Cruisers poured shells into part of Gaba Tepe Look Out Point. How they raised the dust & earth! I can assure you it is good to have them on our side. The Turks sent some shells over on to our ridges and also towards the beach. It may seem strange to say we just watch – or perhaps I should say follow the sound of the shell – as it hisses through the air to see where it will fall or burst. You can always tell if the shell is going well overhead. Of course if it going to burst very near you well – you don’t have time to follow any sound as it is on you before you can move. You generally do a dodge after the danger is past.

0715 to 0745 No. 3 gun fired 15 rds P.S. at an Observation Station and Overhead Cover on slope of PLATEAU 400, N. end of SURPRISE GULLY, Sq. 68-B-6, in retaliation for enemy gun firing on LONESOME PINE.  Ranges 935x-940x.  Effect – Portions of parapets and overhead cover destroyed.  Three enemy guns engaged No. 3 gun damaging our parapets.