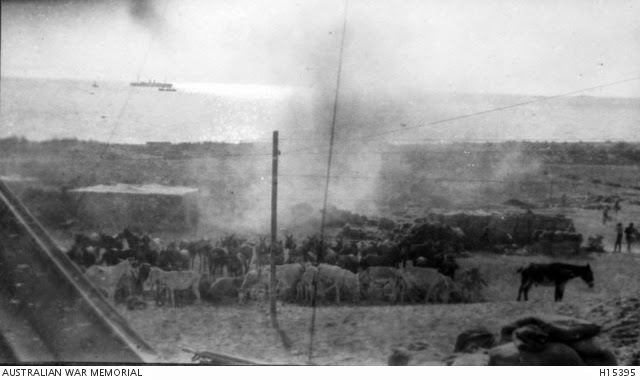 A Turkish artillery shell bursting above a group of mules tethered on
the beach at Anzac - for the previous week, the Turkish Army had shelled
the beach on numerous occasions.
[Courtesy of Australian War Memorial - H15395]

From the 13th to 18th May the enemy continued entrenching on ridge 400 + down ridge in front of our right which we have named gun ridge also sapping over + digging trenches down on ridge about 800 yards in our front.  Their guns would shell our beach at intervals during the day also search the gullies + ridges in our position.  We would reply with BRIGHTON Battery which they were unable to locate.  The seventh Battery did not open fire in accordance with instructions of Col S. MacLagan o/c No 1 Section as these guns only drew fire on our own infantry + caused several casualties.  On 17th Major Burgess returned to duty.


Received cable from Nell in answer to mine. Again reading all day. Wound in back feeling very sore. I think there is still some foreign substance in the wound.