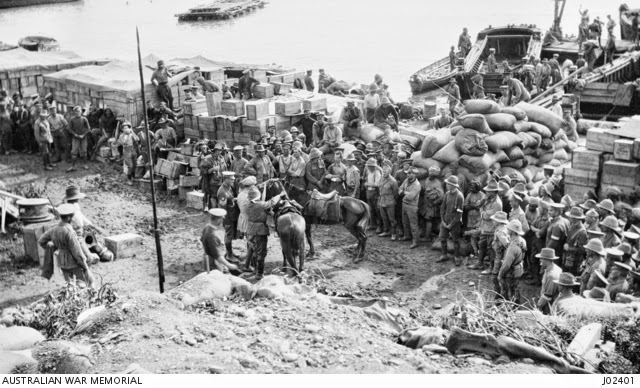 A large crowd of Australian Soldiers on the beach watch on as the blindfolded
Turkish Staff Officer (back turned, just left of centre), who acted as envoy, mounts
his horse after negotiating an armistice to bury Turkish dead, 21st May 1915.
[Courtesy of Australian War Memorial - J02401]


Captain A.P. Crisp transferred from 9th to 7th Battery vice Capt W.A. Leslie died from wounds.  In the afternoon the enemy sent in white flag to negotiate for armistice to bury their dead. 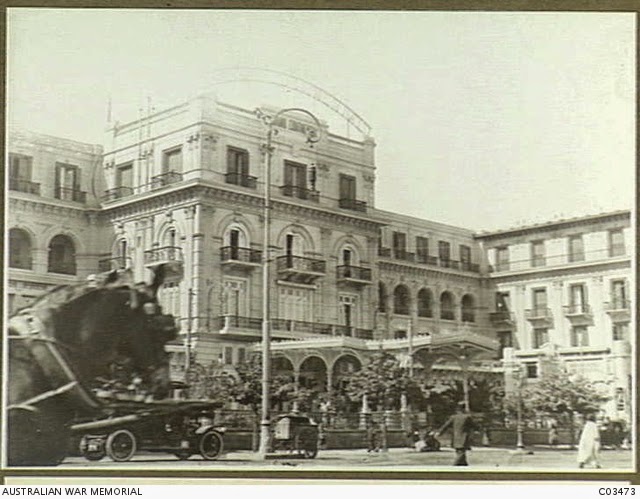 The Continental Hotel in Cairo, in which Col. Rosenthal spent his
final night before returning to the Gallipoli peninsula.
[Courtesy of Australian War Memorial - C03473]


Went into Cairo to have a few articles of kit repaired and get some signal message forms for my Brigade. Went to Hospital had wounds dressed and was discharged. Wounds will not be healed for perhaps 2 weeks, but do not now require much attention, and I am anxious to get back. Had dinner at Continental Hotel. Met Mrs Doctor Stokes and Mrs Major Sutton who commenced plying me with questions, so I had to tell them all I knew of Gallipoli. I have no end of letters and packages from wives for their husbands. Drew field allowance to date. Heard from Base office that to date 89 Australian officers have been killed. Stayed at Continental Hotel for the night.