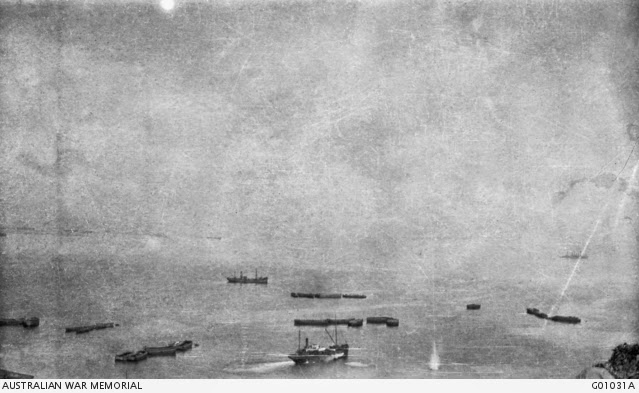 A Turkish gun (or guns) located under cover within the Olive Grove, began to
fire at any craft approaching too close to the beach, or at targets located on the
beach itself, during May 1915 - this artillery position quickly earned the
nickname "Beachy Bill" by the Australian troops, & plagued their existance
for the next 8 months.
[Courtesy of Australian War Memorial - G01031A]

Enemy’s infantry were quiet except for sniping + usual night firing.  They continue to entrench all along our front.  Each day the enemy’s Batteries under cover of Olive Grove shell our beach + our position generally at intervals.  Burgess Battery replies + after a while the enemy ceases fire for the time being.  The enemy also have have a 6 in howitzer in the same locality of a very old pattern which fires a lead coated common shell.  Lt Col Rosenthal returned to duty + resumed command of Artillery 1st Section which consists of 4 guns of 7th Battery + 4 guns of 9th Battery – 2 of which only are in action – the other section being in reserve near beach + is called the ‘Mobile Section’ + is under Lt Ellis.  A British aeroplane flew over about 4pm + dropped 2 bombs in Turkish lines. 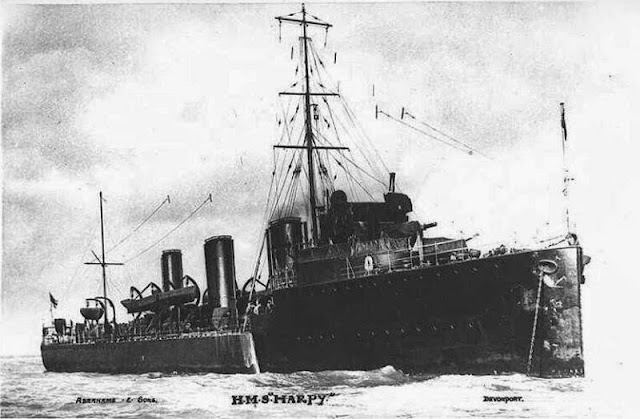 The G-Class Destroyer H.M.S. Harpy, onboard which Col. Rosenthal was returned
to the Gallipoli peninsula & the warm welcome of the 3rd Field Artillery Brigade.
[Courtesy of The Dreadnought Project]

Much to my surprise 4 Torpedo Destroyers came alongside about 9 AM this morning to tranship us to Gallipoli. We bustled around and got our men aboard about noon leaving Mudros at 12.30PM. Each destroyer had about 500 men on board, my boat having 540 including 20 officers. She was named "Harpy". Some of these men and officers had been wounded earlier in the proceedings and were returning from Hospital. We had a beautiful trip to Gaba Tepe, quite a yachting cruise, about 50 miles at 20 knots. When we reached Gaba Tepe we were preparing to transfer into punts to be towed ashore by launches. The Turkish artillery opened on us with shrapnel firing 8 rounds. Four were effective and in a few moments we had 42 casualties on my boat, 5 being killed and 7 so badly wounded that the doctors held out no hope for them. It was a dreadful experience, and the wardroom was temporarily turned into a Hospital.

Luckily we had three doctors on board.

When I ultimately got ashore I reported immediately to General Birdwood and Col Hobbs. It was good to hear their hearty welcome, I think the more hearty because they had been watching the effect of Turkish shells on the Destroyers.

My own officers and men particularly gave me a most hearty welcome, in fact we owe it to the work of 9th Battery guns that the Turkish Artillery was silenced early. I found letters from Nell, Chis & father awaiting me.