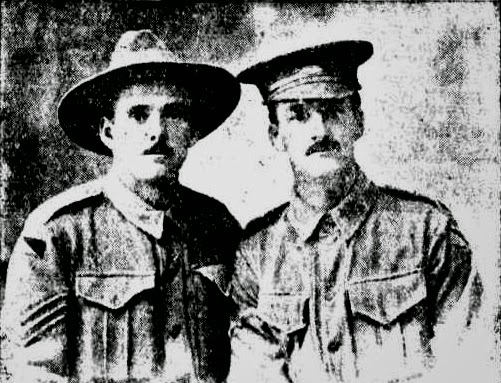 "Sergeant Coleman is the son of F. F. Coleman, of the Department of Agriculture,
and Bombadier Sparkes is the son of Mr. Sparkes of Allan and Stark's.  They are
in the Field Artillery.  Both were wounded by the same shell, and they were in hospital
together.  Both received their discharge on the same day, and returned to the front
in Gallipoli" - published in The Telegraph on the 24th July 1915.  Sergeant Coleman
was hit by shrapnel in the left buttock, whilst Bombadier Sparkes was hit in the back
(mentioned below by Major Hughes).
[Courtesy of National Library of Australian - Trove]

In accordance with orders from Div Artly HD Qrs at 10 o’clock all our guns opened fire on the enemy each gun selecting an objective where the enemy guns or infantry could be located or were suspected of being.  The enemy guns replied putting No. 2 Gun Hughes Battery out of action by a direct hit to the shield.  This gun was the same one which had previously been put out of action on 8th but which had been replaced by new cradle, gun + rocking bar sight from spare gun on beach.  On this occasion the shield [ineligible] case lynch pin off wheel + elevating ranging gear were damaged + spring case punctured.  A Corpl + a Bombardier were wounded but not seriously.


Mr Pengelly called to see me also Mrs Mackworth. Wrote Arthur King, Melbourne. Had an X ray taken of wounds. Discovered lumps of gravel. Put me on the operating table and removed them. Nurse in attendance on the Surgeon Col Downes, proved to be Mrs Rogers, wife of Capt Rogers 8th battery.

Although it rained fairly heavy during the night my mate and I were duly rewarded for our exertion in completing our dugout last night, we worked at it till well after dark and had the satisfaction of not being disturbed by the rain as it kept perfectly dry.  We have made a terrace of dugouts in the steep side of Victoria Gully and ours is about 4ft wide to allow two of us to lay in the comfortably and the back bank about 5ft deep. We have banked up the sides a bit with old ration bags filled with the earth and covered to the top with our waterproof sheets laced together. It is not altogether worth writing home about, nevertheless it is quite serviceable and as comfortable as circumstances will permit. Any how it is useless going in for anything flash here as Abdul seems to object even to us having what we have got. We are likely to be more contented here in our new situation as the enemy cannot observe all out movements like he could in the old, we also get a nice sea view here. With all the transports at anchor and the various battleships and other naval boats with the islands of Imbros and Samothrace in the distance we get a scene that always offers a certain amount of interest and by climbing a few yards up the steep slope behind us we can get a magnificent view if Kaba Tepe with its wrecked fort on our right flank and away to Cape Helles in the distance. Being off duty today we did not turn out till dinner time when the rain had cleared off. The enemy has been very active again today with his artillery, they put one of the field guns of Hughes battery out of action temporarily and two of the crew were badly wounded. This battery is posted on our right flank and one of the runs is practically in the front line looking right at the enemies positions. It is only used in emergency in the case of the enemy attacking, when it would be firing at point blank range. We discovered this evening that we have to contend with the enemy’s artillery from two directions as they can get at us better from another direction, that is down Victoria Gully, but they cannot get any observation from that direction any more than from Kaba Tepe, so they can only send them over and chance to luck about hitting anything. Some of our Light Horse Regiments landed here today without their horses, to relieve some of our infantry who badly require a spell.