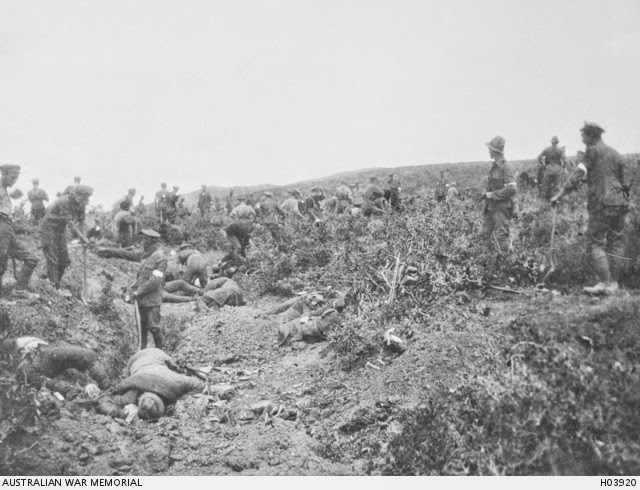 Australian burial parties burying Australian and Turkish dead during the armistice
on the 24th May. More than 3000 Turks and approximately 160 Australians were
killed during the Turkish counter attack on 19 May 1915. Approximately one million
rounds of ammunition were fired during the one day attack. The stench from the dead
was so unbearable that the Turks initiated a nine hour armistice so that both sides
could recover and bury the dead.
[Courtesy of Australian War Memorial - H03920]


A cessation of hostilities was arranged from 7-30am to 4-30pm for parties from both sides to collect their dead.  We estimated the Turkish dead from the attacks delivered on the 19th + 20th to be about 3000.  About 7 hrs a gun from 224 X9 shelled our lines near Mountain Battery. 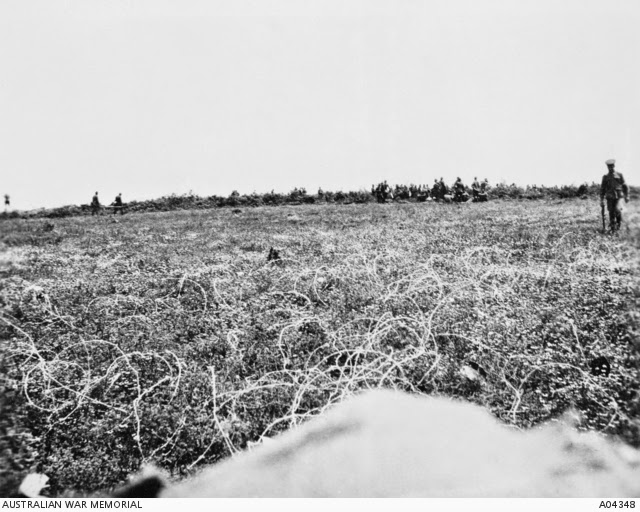 View from the 11th Battalion's front during the armistice, not far from the
7th Battery's firing position on Bolton's Ridge, showing Australian burial
parties burying Australian and Turkish dead.
[Courtesy of Australian War Memorial - A04348]


A beautiful day with smooth sea. Adjutant getting all units adjusted. Not an easy job with so many units represented. Careful lookout all day for submarines or Torpedo boats. Armed guard of 250 standing by with 750 men available at a minute’s notice. Expect to arrive at Mudros about 6 PM tomorrow. What a strange ‘Empire Day". No celebrations required this year to prove the solidity of the Empire. The world’s battle fields are sufficient indication.