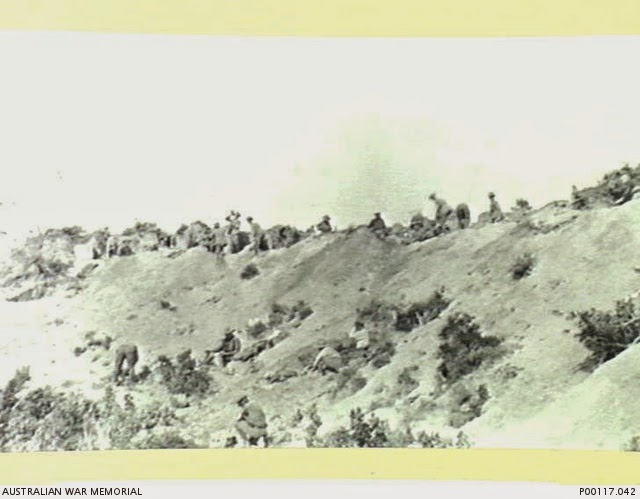 The enemy again shelled us the shrapnel falling close but doing no damage.  The warships + transports were also shelled with heavy stuff from the other side of the Peninsula but only one collier was struck but she managed to steam out of range. 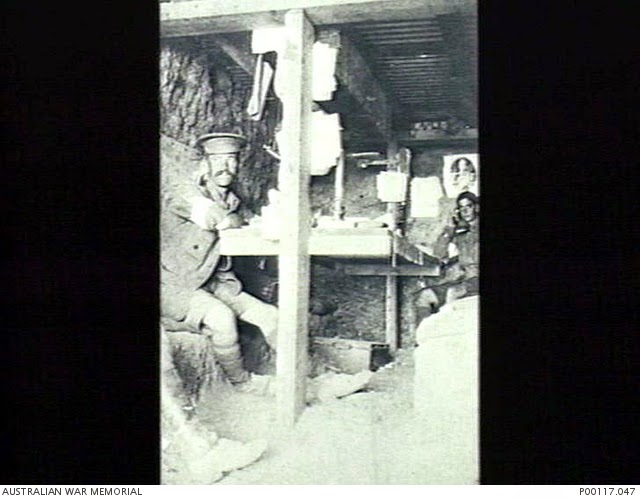 
Just a week ashore. Time does fly along. An advance intended for tomorrow. This will give us a first class position for Artillery observation. The 6" gun again opened on us this morning but from a new position. We have not yet located it. Major Burgess this morning took on Artillery coming into action, and Lieut Crisp machine guns in action. As I write bullets are "pinging" over our "dugout". We are really very comfortable at our Head Quarters. We have one "dugout" as our office, which contains all our Telephone Service. Connected close to it we have a general living room about 9’ x 9’ and about 6 feet deep, covered with sandbags and earth. In one wall we have three wooden ammunition boxes, built in to hold our rations, glasses, revolvers and any other small articles of Kit.

On this ridge a number of small pine trees are growing, and Bligh has covered the floor with a thick layer of young branches, so we quite imagine from the smell we might be in the heart of a pine Forest. We are safe here from shrapnel fire, but of course not from heavy shell or high explosive shell. I had my first shave this morning since leaving the ship, also my first really good wash and a change of underlinen. They sent off my dressing case from the ship, for when we landed last Sunday we brought nothing except a bed and what we stood up in.

Today has been generally quiet. We dug alternative emplacements for our guns so that we can withdraw them if necessary. They will be properly sandbagged tomorrow. Position selected on Hill to my left for Major Browne to bring one gun into action. Engineers and Infantry prepared roadway and assisted our gunners to drag up the first gun and limber. Then I made arrangements for a second gun of 8th Battery. The getting of the second gun into position was much delayed because one of the enemy’s 4 gun batteries opened rapid shrapnel fire on the beach and kept everybody under cover for some time. As far as I know no casualties were reported. I expect this gun will get into action tonight and I have supplied the section with 600 rounds shrapnel just "to go on with". Our 3rd Brigade is doing admirably and I am exceedingly proud of my Command. I only hope I May be spared to lead it till the end of the war.

While I was busy on the phone tonight growling at the Staff Captain because he had not secured us 500 sandbags for entrenching as promised, I was told a mail was in. One cannot imagine how delighted we all were. I received a letter from Alvord dated 21st March, 3 from Nell dated Feby 9th, March 21st and March 22nd, also one from Arthur King Melbourne, Robson & Cowlishaw acknowledging medical Certificate, and one from A.T. Sharp London, saying he was sending my long wanted "Orilux" lamp. Also a letter from Father and Mother and one from Mrs Parker, widow of Major Parker in answer to a letter of condolence I had written her.

I have been quite happy in my service with the guns for the past week, though nights without sleep naturally leave one weary, particularly too when the position has been such an anxious one, but the reading of all my letters tonight made me feel somewhat unmanned. All contained prayers for my Safe Keeping. My letter from the dear old dad was perhaps the best I have ever received from him. The circumstances are unique. I read them all in my little "dugout" with an ammunition box for a seat and a candle on another box at about 9.30PM. The Navy’s guns were booming out in terrific fashion at the Southern end of Gallipoli peninsula, my four guns were talking within a few yards of me, and as every round was fired dust and dirt fell from the roof of my "cabin". The enemy’s and our rifles at the same time keeping up an incessant crackle. Of course just as I got settled to read my letters, staff officers, telephonists etc must come bothering me about something or other, while I wanted to be alone. I would give up a great deal if I could see all my family tonight. My heart is very full. The sights and experiences of the past week are indelibly stamped in my memory and can never be effaced.

Our attack scheme on Contour 400 set down for today has been postponed.