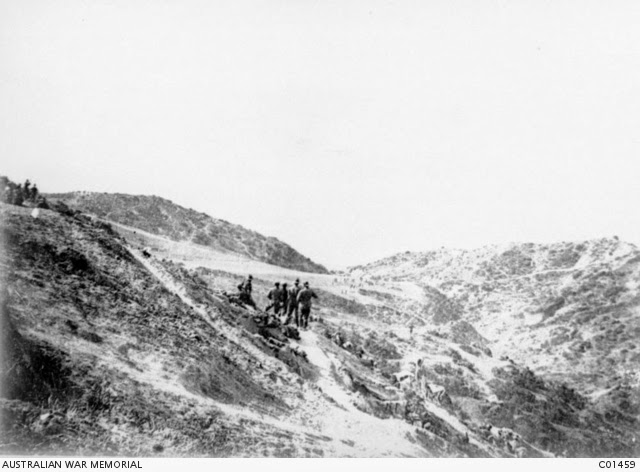 Soldiers & Officers standing alongside Shell Green below the 7th Battery positions,
watching  destroyers out to sea hunting for the submarine that had just torpedoed the
battleship H.M.S. Triumph.
[Courtesy of Australian War Memorial - C01459]

Morning quiet.  About noon H.M.S. “Triumph” anchored off Kaba Tepe was torpedoed by enemy submarine in 7 minutes she listed over to starboard + at 12-15pm capsized + floated bottom upwards until 1pm when she sank bow first.  70 men were lost out of crew of 700.

At 2pm Brighton Battery shelled gun pit under construction in vicinity of Olive Grove + about 5pm fired on convoy on road in same neighbourhood.  During the afternoon it rained making the trenches very sloppy.


Again a smooth sea and a very fine day. Passed Syros early in the day and reached Mudros Bay in Lemnos Island at 4.30 PM. Anchored well up the bay. A destroyer crowded with sailors entered the boom just ahead of us. Reported to "Hussan" at 5PM, thence to Headquarters on "Atlantean". Was there informed that submarines were in the vicinity of the Dardanelles and therefore it was dangerous for transports and other large vessels to proceed there. In consequence we have to wait here till trawlers carrying about 500 men apiece can deliver us to our destination. As there are 6000 troops here we may not get away for a week. I am however trying to get upon a destroyer.

We were informed that H.M.S. Triumph was this morning torpedoed by a Submarine off Gaba Tepe, and that the sailors we saw on the Destroyer were survivors. We do not know how many casualties there were. We were also told that two nights ago the Turks, strongly reinforced, attacked our positions at Kaba Tepe at 1 AM. Our men counter attacked about an hour later and accounted for 9000 Turkish casualties, while our losses were 500. An Armistice was declared next day, the Turks burying 3000 dead. Such a heavy list of Turkish casualties makes me think our guns must have been doing good work during the night. I shall be desperately anxious to get away from this Port. I want to be with my guns.

As we are now in Port there is no trouble about darkening ship. In consequence all lights are going again. It was officially notified to us tonight that Italy has at last joined in with us and declared war against Austria. I wonder what will be the result in the Adriatic Sea. Men on board are a terribly undisciplined crowd. I have representatives of no less than 44 different units on board; some without officers, so it can be imagined how difficult it is to ensure decent troop ship discipline.