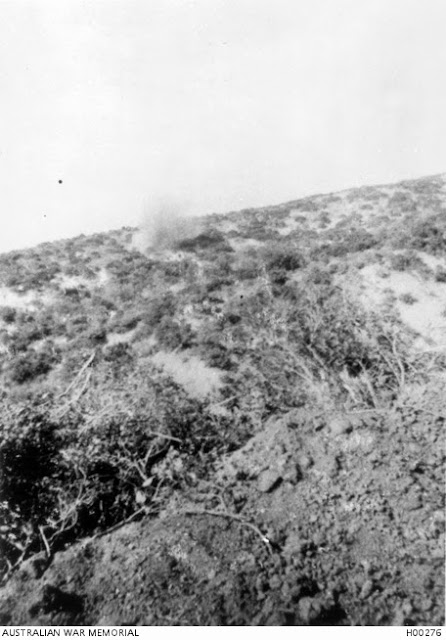 Enemy’s batteries opened on our right from concealed positions behind Olive Grove near ASMAK DERE + the vicinity of KAPA TEPE.  We were unable to locate them but searched the neighbourhood where we suspected them to be.  Capt. W.A. Leslie wounded by shell in legs + arm + removed to hospital ship where he died from wounds 11am. 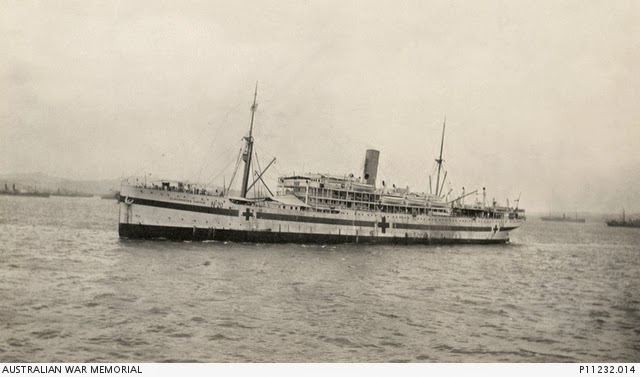 The Hospital Ship Gloucester Castle, on board which Col.Rosenthal, Major Burgess
& Captain Leslie were transferred from the peninsula.
[Courtesy of Australian War Memorial - P11232.014]


About 8 o’clock this morning my servant (Bligh) came off from the shore with my effects, and later went off to the "Cardiganshire" and got the remainder of my kit. The Senior Medical Officer, Col Ryan, has ordered me to return to Alexandria or Cairo as May be convenient, to have X rays applied to my wounds to locate bullets. When extracted perhaps a week will see me fit enough to return. I am very anxious not to lose any of the show. Major Burgess came on board at 10AM with a launch of wounded, included in which was Capt Leslie. Early this morning a shrapnel shell caught him, smashed his thigh terribly, and badly damaged his head and chest. He died at 2 PM mainly from shock, tho’ the medical officer stated he could not possibly have survived his injuries. I feel awfully sorry. He has done most excellent work during the 11 days we have been fighting. I hear we are to leave tomorrow for Alexandria.

Born at Hamilton, Brisbane, on the 19th August 1887, Walter Aland Leslie was an Old Boy of Brisbane Grammar School.  An accountant and Company Secretary for John Reid & Nephews (furnisher's warehouse) in civilian life, Walter spent four & a half years in the Australian Field Artillery, & gained certificates in Military Engineering, before accepting an appointment as Lieutenant (soon to be promoted Captain) in the Expeditionary Force the day after his 27th birthday on the 20th August 1914.

One of Captain Leslie's artillerymen, in a letter home, described the incident in which his Commanding Officer's life was lost - at the time, Captain Leslie was likely in charge of No. 2 Gun (on which Gunner Billy Pacey also served):-


"Yes, dear mother, I can tell you all about poor old Captain Leslie's death. You see we were in action on the top of a ridge engaging a battery of four Turkish guns, and I might say they (shells) came over very thick and often. The shells were falling all round our gun and Capt. Leslie's observing station just outside our gun pit. One or two shells went right through our pit putting our phone out of action. Then a high explosive fell right into the hole containing Capt Leslie and a lookout man a bombardier. The bombardier escaped with only a light peppering of small splinters of the shell, but the poor skipper received the full force of the explosion, shattering his thigh & leg and tearing away a huge piece of flesh from his forearm. Oh dear he was game to the last. He was hit about 9.30 a.m. on the 6th of May and died and was buried at sea from the hospital ship. The last I saw of him was being carried down to the beach after receiving first aid by our Dr. Alex Marks and the Capt was saying "I hope the boys won't think I'm a coward." Why anyone who knew him could not say or think anything like that. You see he was in very great pain. I must say (for I was with him from the start) he was as brave and game a man as ever one may wish to meet. He was so keen & brave that I think at times he was just a little too reckless in exposing himself. I saw him have more than one narrow escape. You see the previous day we had fought single handed a four gun battery & gave as good as we got but my word it was hot work. This was what Capt Leslie, myself & detachment, were mentioned in despatches for. We were all very sorry to lose such a keen officer & comrade as the Capt proved to be, and he will not easily be replaced. We are erecting a large wooden cross in the graveyard behind the ridge where he was killed in memory of Capt Leslie, close by a few more of our old battery." ~ [Courtesy of Clan Leslie Society of Australia & New Zealand]

Some controversy exists surrounding the final resting place of Captain Leslie.  The Department of Veterans Affairs states, "Confusion seems to have surrounded the subsequent death and burial of Captain Leslie who was reported to have been taken on board the hospital ship Gloucester Castle, where he died at 8pm and was buried at sea. His family was told that he had died of wounds on 8 June 1915. However, in 1919 Leslie’s remains were located on Gallipoli by the Graves Registration Unit and buried at Shell Green Cemetery" [Courtesy of Gallipoli and the Anzacs].

This account contradicts a) the 7th Battery Unit Diary of Major Hughes: "Capt. W.A. Leslie wounded by shell in legs + arm + removed to hospital ship where he died from wounds 11am" b) the account of Captain Leslie's wounding & subsequent death by a Gunner under his command: "He was hit about 9.30 a.m. on the 6th of May and died and was buried at sea from the hospital ship" c) Col. Rosenthal's personal diary entry, written on board the Gloucester Castle: "Major Burgess came on board at 10AM with a launch of wounded, included in which was Capt Leslie. Early this morning a shrapnel shell caught him, smashed his thigh terribly, and badly damaged his head and chest. He died at 2 PM mainly from shock, tho’ the medical officer stated he could not possibly have survived his injuries"  d) the 9th Battery Unit Diary of Major Burgess: "Ordered off to Hospital Ship "Gloucester Castle" at 10 am. Capt Leslie of 7th Batty sent off to ship in same boat, but dies of shell wounds shortly after reaching ship.  Buried at sea."  Col. Rosenthal had served with Captain Leslie for many months leading up to the Gallipoli landing, & would easily have recognised his junior Officer even from a distance, as would Major Burgess of the 9th Battery, who clearly recognised Captain Leslie in the tender transported them both to the awaiting Hospital Ship.  Furthermore, Col. Rosenthal had clearly gleaned knowledge of Leslie's death from a Doctor on board the Gloucester Castle - his account of Captain Leslie's presence & death on the hospital ship is serious food for thought.  Further thought should also be given to the account provided by the Gunner under Captain Leslie's command (above), who states, "We are erecting a large wooden cross in the graveyard behind the ridge where he was killed in memory of Capt Leslie, close by a few more of our old battery" - is it possible that the Graves Registration Unit located this marker in 1919 & accidentally exhumed a neighbouring artilleryman for re-interment under the headstone of Captain Walter Aland Leslie?? 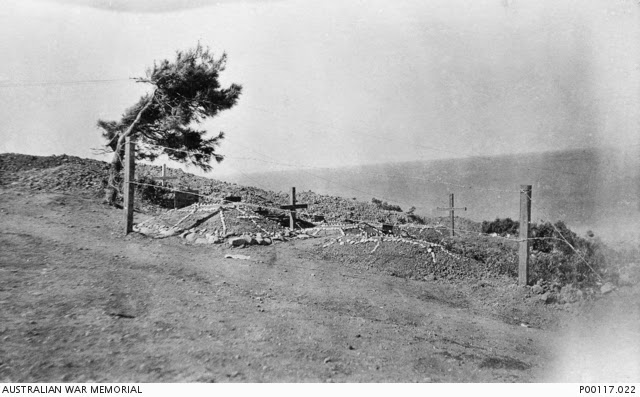 A photo of the original Shell Green graveyard, taken by Sergeant Owen Kenneth
Stewart of the 7th Battery, where six of his fellow 7th Battery men were buried
alongside a number of the 9th Battalion: "It's a beautiful spot overlooking the
sea and Gaba Tepe Point.  This was originally the 9th Battalion graveyard but
latterly, several other regiments filled up all the spare cemetery ground seen in
the picture."  Captain Leslie's memorial cross would have been erected within
this graveyard - could one of the other men buried here now lie in Captain Leslie's
grave at the current Shell Green Cemetery?
[Courtesy of Australian War Memorial - P00117.022]