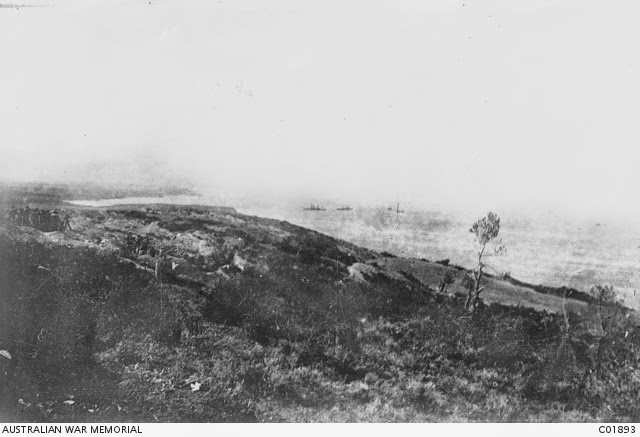 "The Royal Navy battleship H.M.S. Canopus tows away H.M.S. Albion, which had gone
aground near the headland known as Gaba Tepe. While aground, H.M.S. Albion came
under fire from Turkish batteries and she defended herself with all her guns.
H.M.S. Canopus spent three hours towing her to safety" - 23rd May 1915.
[Courtesy of Australian War Memorial - C01893]


At daylight HMS “ALBION” was discovered to be aground off KAPA TEPE.  The Turks opened on her with shrapnel + the GOEBEN or DARDANELLES forts also tried for her with heavy shell but missed. We shelled OLIVE GROVE with Brighton gun with No 1 gun + the Albion herself + the CANOPUS who was endeavouring to tow her off fired heavily.  About 9-15 she moved off + steamed clear.

In the morning a Turkish aeroplane flew over our lines + dropped a bomb killing 1 man.  In the afternoon they shelled our beach with a gun on ridge opposite our right.

Owing to delay in repair of a broken steam pipe, ship did not leave Quay till 2.30 PM. We are trying to evolve order out of chaos. Nearly every arm of the service represented by small squads though Infantry alone total about 1800. Some of the latter are very much a rabble, and have had too much liquor before coming aboard. At 5 PM when well out to sea we heard cries of "man overboard". One of the Infantry who was worse for liquor had fallen overboard. Buoys were thrown to him, ship turned about and a boat lowered. He managed to swim to one of the buoys and secure it, but he was in a bad way when lifted into the boat. Evidently he had swallowed a large amount of salt water.

Assembled all officers in the saloon during afternoon and arranged details re allotting of troops to decks etc. Also read out instructions from Vice Admiral Pieise, re treatment of hostile torpedo or submarine craft. Called by the Captain at 9.30 PM A ship showing only navigation lights was manoeuvring around us in a suspicious manner, but eventually went on her course. I think she was scared of our ship (being in darkness) and kept her bow on to us till we had passed.