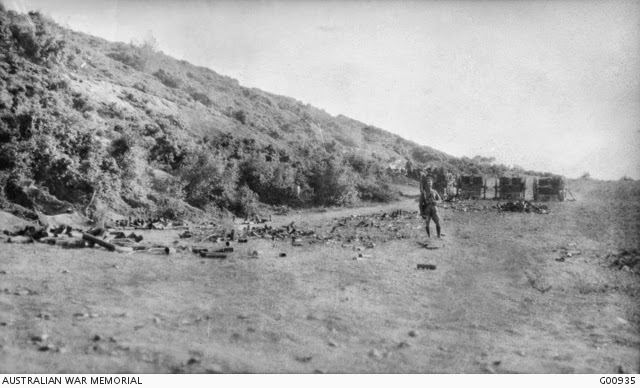 In the morning + afternoon we were again shelled + although they landed one percussion in the parapet of No 1 gun no one was hit.


Heavy cannonade this morning by navy. Our guns also at work early. I hear the enemy inflicted losses on our 4th Brigade about 5 A.M. this morning. The old 6" guns on our right flank again opened and fired a few rounds, but No 1 gun 7th battery stopped her. Heavy guns from direction of Fort 32 on the Dardanelles also fired many rounds at Transports and Men O’ War. One transport appeared to be hit, but not seriously damaged. General Bridges with naval officers and Col MacLagan also myself discussed sending demolition party to Gaba Tepe at 4.30 AM tomorrow. Navy to land men, who will be covered by our Artillery fire and that from destroyers. Fresh gun emplacements being made for alternative use. Major Browne now connected up by Phone. His two guns are in action. The 6" gun again opened fire this evening, but we located and stopped him. So far he has done no damage. The shells are lead coated and have no copper driving bands.