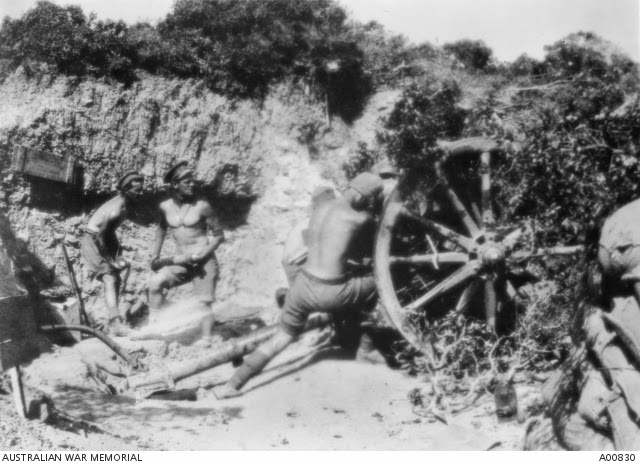 One of the most widely distributed & recognised artillery photos of the
Gallipoli Campaign, taken on or about the 19th May 1915 - "The No. 4
gun, an 18 pound field gun of B Sub-section, 9th Battery, in action during
a Turkish attack. They are firing from McCay's [M'Cay's] Hill towards
the Olive Grove, targetting a Turkish supply train about to enter a sunken
road. The gun is camouflaged with leaves attached to netting. There is a
pit behind the two gunners facing the camera, which was used to store high
explosive ammunition. Further left is a telephone pit and shelter. Identified
are, left to right, Sid Fergusson; 1955A Charles Henry 'Harry' Briggs; 2011
Gnr Leonard Lovett (partly concealed); and 1994 Gnr Eric Gordon Harris
(with back to camera), all of Hobart, Tasmania. This photograph was copied
from a print held by Lt Col Riggall."
[Courtesy of Australian War Memorial - A00830]

During the day the enemy were quiet but about 7-30pm an attack was made in force by the enemy on our whole line + was continued for about 3 hours but was repulsed every where.  We put some zero shrapnel into the enemy at close quarters.

Reading all day. Had dinner with Col Springthorpe at Mena Hospital, and gave the patients (about 300) an account of Gaba Tepe action from an artillery point of view. All seemed very interested. Got Col Springthorpe to call and see Mr Pengelly - he is not at all well, and is terribly afraid he has lung trouble.

I heard today that General Bridges had died as result of wounds.

Born at Castle Cary, Somerset, England in early 1888, Norman Charles Unwin emigrated to Australia on board the R.M.S. Orvieto (the ship which, ironically,  would become the flag ship of the A.I.F. First Contingent on its voyage from Australia to Egypt & Gallipoli in late 1914). Arriving in Brisbane on the 22nd of August 1910, Norman soon relocated to the pastoral town of Springsure in Central Queensland, & took up work as a drover.  On the outbreak of war, Norman traveled south to Brisbane, where he enlisted with the Field Artillery on the 27th of August 1914 - at the time of enlistment, Norman declared he had previously served 2 years with the Volunteer Forces & a further 2 years with the Territorial Force.

Having traveled to Gallipoli with the 7th Battery, Gunner Unwin fought alongside his fellow artilleryman up until the large scale Turkish attack of the 19th May 1915.  During a heavy bombardment of the Battery's positions by the Turkish artillery, Gunner Unwin and fellow Gunner Hattil Spencer Foll were wounded, Gunner Unwin's injuries being considered serious enough to require his removal from the peninsula to the awaiting hospital ship H.M.T. Soudan.  For Gunner Foll, whilst not officially recorded in his service records (some sources stating wounded in head & leg), the injuries sustained were likely slight enough to preclude his removal from the peninsula itself, as he would return to service with the Battery a week later on the 26th May - he would be taken off the peninsula due to rheumatism a few months later, returning to Australia for discharge shortly afterwards, at which point he entered politics & was elected to the Senate.

For Gunner Unwin, however, the prognosis would not be so optimistic.  Having sustained a compound fracture of the right femur (his leg likely having been mangled due to the artillery strike), he languished through the night & passed away from his injuries the next day on the 20th May 1915.  Some confusion surrounded his date of death - in his diary, Col. Rosenthal lists Gunner Unwin as having died from wounds of the 19th of May, however this incorrect information would have been passed on to Rosenthal after his return to the peninsula in late May after his hospitalisation in Cairo.  Original notification sent to Norman's next-of-kin documented his death on board the H.M.T. Gascon on the 29th of May, however corrected information was soon despatched declaring death to have occurred on board the H.M.T. Soudan on the 20th May. 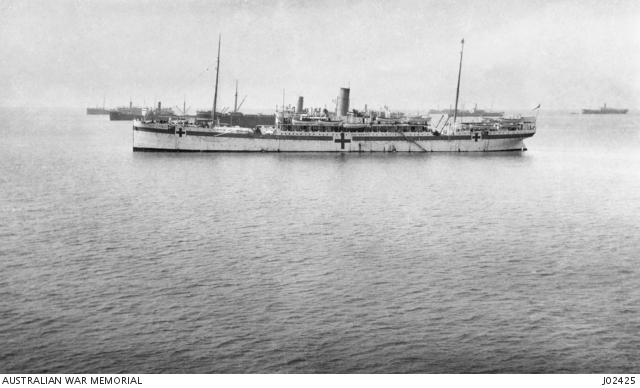