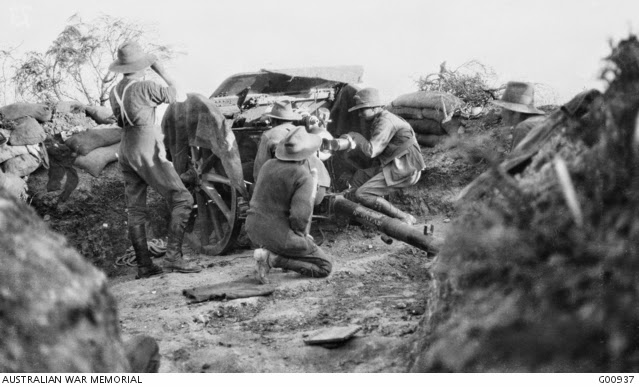 A reconnaissance in force was made by our infantry about 4am on KAPA TEPE which disclosed the fact that the enemy were strongly entrenched there with machine guns and small gun about a 3 pounder.

Our attack was driven off + the force were taken off the beach by boats from the Navy covered by fire from the ships.  Our casualties were heavy + the Navy also lost some men.

A Pinnace afterwards steamed in under the red cross + removed our wounded.  The enemy also came out under their red crescent + removed theirs.

The 7th Battery detachments relieved the 9th Battery on the guns.

During the night there was continuous rifle fire on our left. 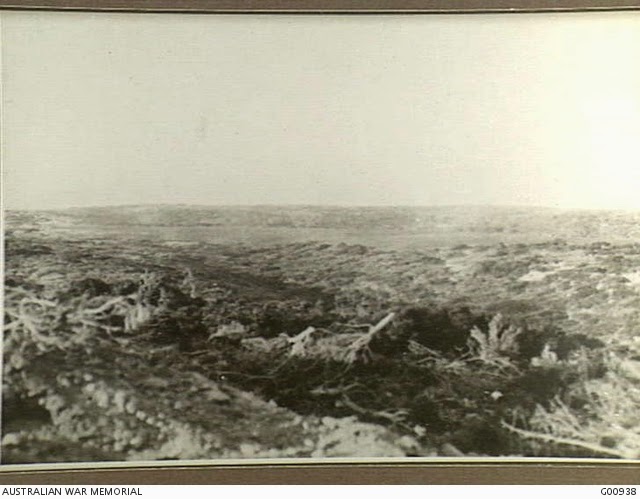 "The Wheatfield" in front of the Australian line at Anzac, photographed from the gun
pit of the 7th Battery's No. 4 Gun, by Captain C.E.W. Bean on the 4th May 1915.
[Courtesy of Australian War Memorial - G00938]


At 3.30 AM this morning I engaged enemy’s Infantry on Shrapnel ridge. At 4.30 AM party from 3rd Infantry Brigade landed on beach at Kaba Tepe, but were met by heavy machine gun fire.

Destroyers and my guns peppered the point thoroughly, but it appeared unwise to carry the attempt any further, so troops were returned in boats to the Destroyers. Bullets flew all around them, and from our gun positions we could see the whole drama. Altogether I Understand eight were killed including one officer and 18 wounded. I expect Kaba Tepe will eventually be taken from the land side. A battery came into action yesterday about 1700* distant, and let us have our first taste of shrapnel. Fortunately no harm was done. Mr Crisp located him again this morning. His men were busy making emplacements and their picks were visible. They did not remain there long. A pinnace went out about noon from the navy to bury dead from morning’s operations, under cover of Red Cross flag. They were not fired upon. At 2.30 Turks carrying Red Crescent searched for the dead and wounded. They were also not fired upon by us. Major Hughes personnel resumed duty on their guns at 4PM. Major Burgess’ personnel relieved for a few days. I heard unofficially today that Lieut Clowes and three gunners of 8th Battery had been wounded in action, but I have no definite details. There is also an unconfirmed rumour that Lieut Morgan is a casualty. A very quiet night. Both Lt Richards and myself had a good sleep.