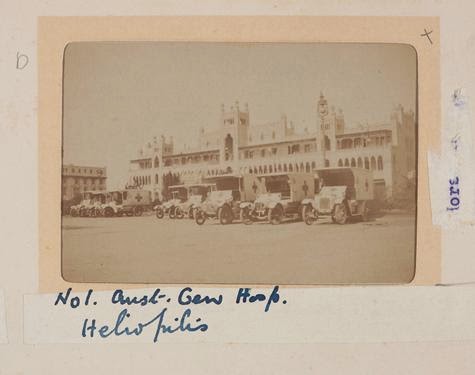 Ambulances parked in front of the No. 1 Australian General Hospital at Heliopolis.
[Courtesy of Museum Victoria]


Ali Bey called to see me today, bringing with him a beautiful bunch of flowers. He was greatly concerned to hear of my being wounded.

The below is an abridged letter sent from Col. Rosenthal to a friend in London,
some days after being admitted to the Heliopolis Hospital, as published in the
British Australasian on the 27th May 1915 - as a result of this breech of secrecy
(detailing artillery positions & number of casualties), Col. Rosenthal would
be censured in the following weeks:

"Your letter of April 9, with enclosure, was delivered to me in my "dug-out" in the firing line at Gallipoli on April 29. I have had the unique experience of 11 day's fighting with guns absolutely in the Infantry trenches, and my men have done magnificently. My brigade has had about 40 casualties, including four officer, but only one death, one of my captains. A shrapnel shell burst in my dug-out on Wednesday evening, May 5, and as a consequence, one of my battery commanders and myself were laid out. I got one bullet in my right knee, one in my back under the right shoulder, and one in my left arm between elbow and shoulder, as well as bruises generally. I am getting on favourably here, and hope soon to be back to duty."