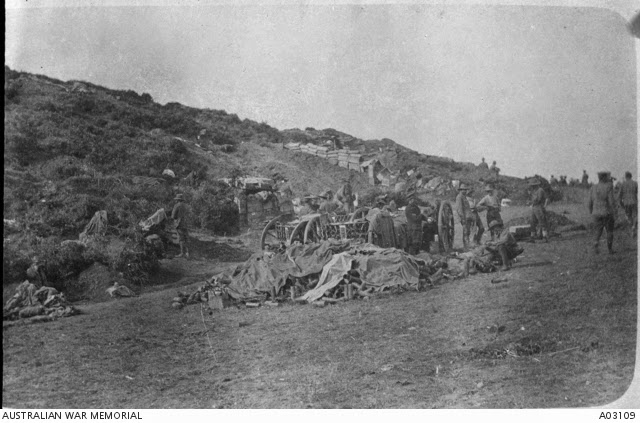 The wagon lines, about 30 yards behind the guns, of the 7th Battery - empty
18 pound shells have been collected & covered in the foreground (mentioned
by Col. Rosenthal below), with empty wooden ammunition cases, dugouts
and the cookhouse visible in the background.
[Courtesy of Australian War Memorial - A03109]


The Turks have each night been digging + are near entrenched along ridge 400.  After big shells were dropped in the sea but no transports or warships were hit.

In the afternoon several guns opened on us from near KAPA TEPE + the vicinity. We engaged them with our Nos 1 + 2 guns + appeared to put 1 of the enemy’s guns out of action.  A percussion shell came through roof of Col Rosenthal’s dug out wounding him + Major W. Burgess 9th Battery. 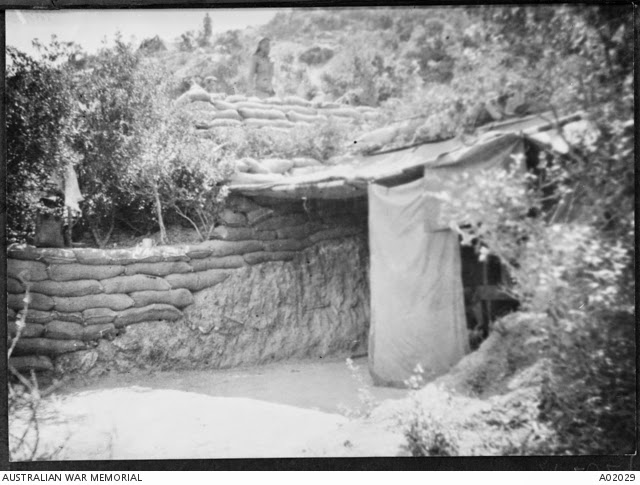 Colonel Rosenthal's dugout at Anzac, which was arranged as an office and
sleeping quarters with a piece of canvas hanging from the top of the dugout
probably to afford some privacy (detailed below).
[Courtesy of Australian War Memorial - A02029]

Very quiet during last night and this morning. We know the Turks are busy entrenching. This morning I visited Section of our line where Major Browne has two guns. Saw Col Hobbs there also Colonel Johnstone. I think his position will turn out to be a good one and work in well with ours. On my return I met General Birdwood and Admiral Thursby. They wanted to see Kaba Tepe from landward. There has been a certain amount of activity on this point all day and No 1 gun has been giving them attention. Deepening all our trenches for further security and improving approaches and exits for guns should they require to be moved. Today collected all 18pr shell cases for return to Ordnance. Operation order no 5 issued today. It provides for the transfer of two Brigades Infantry and details to Cape Helles tonight to assist 29th Division, our line in consequence being divided into two Sections instead of three. We are in No 1 Section, Commanded by Col MacLagan DSO Further casualties to date in the Brigade are as follows: -

*Here, a disconnect occurs in Col. Rosenthal's personal diary, with a note penned
on the 7th May 1915 - "Will now continue Diary where I left off at 4.30 PM 5th inst."

A momentous afternoon for Major Burgess and myself. During the morning I had instructed Major Burgess to make a reconnaissance of our trenches on the Left with the object of finding a good observation post in the vicinity of Contour 400, from which to direct fire of 7th Battery. He returned to my Head Quarters about 4.45 PM and commenced to tell me all about his reconnaissance. About 5PM a few percussion and time shrapnel shell fell around us and as Major Burgess was sitting on the floor in the centre of my dugout I suggested he had better sit close against the wall with me. At about 5.15 PM a shell struck the roof of the "dugout" in the corner and burst on entry. Both Burgess and myself were momentarily stunned by the shock of the explosion. I heard Burgess say "Are you alright Colonel", I replied "Yes, are you hurt". I got no reply but found Burgess had swooned. He had a nasty gash in his neck, another on the side of his face and his face covered with gravel and blood. I stanched the bleeding with a clean towel I had handy and sent for our medical officer. He came with his Assistants and attended to Burgess. In the meantime I discovered my own head was bleeding profusely and I also had a fragment in my right knee. I managed to get down to the Dressing station of the 3rd Infantry Brigade which was close to us. Their medical officer dressed my wounds and sent me to the Clearing Hospital on the beach. Two men (one my batman Bligh) assisted me along. In passing I want to record how proud I was of Capt Leslie and Lieut Ross with their detachment. Even while shell were falling all around them, they served their guns quite coolly, located the enemy, and wiped out two of his guns. I had to wait till 7.30 PM for a launch to take me off to the Hospital Ship "Gloucester Castle". About 20 wounded went off with me. A strong wind and heavy sea had sprung up, and we all got a good wetting and tossing about before reaching the ship. Then there was great difficulty in getting aboard. I managed to scramble up the Companionway but all the others were lying down cases and had to be lifted into the ship in slings with steam tackle. When the doctor came to overhaul me, he found my injuries to consist of severe contusions on head, neck, shoulders and back, (due to the blast of explosion having forced gravel from roof through my coat, woollen vest, shirt and singlet, these garments being a wreck!) a bullet wound under right shoulder in the back, a bullet in upper left arm and another in right knee. He located all three bullets or perhaps pieces of gravel, and luckily my knee joint is not affected. All wounds were very painful during the night. Especially back, which was just as if I had received a severe thrashing. One of Major Hughes men (a telephonist) was hit in the arm with shrapnel about the same time as I was hit. Both Major Burgess and myself cannot understand how we escaped death. The explosions occurred in a "dugout" about 9’ X 9’ or less. A kerosene bucket in the middle off the room was riddled as also was my Sam Browne belt and other equipment, while the wall opposite where we were sitting is badly damaged and punctured. We have both come to the conclusion that we surely are not destined to be killed by shrapnel. I do not forget the letter I received the other day, in all of which I was told prayers were daily offered for my safety. Is my escape due to them? My head is still in a whirl, due I suppose to the shock of explosion in a confined space. Some of our troops (2800) with 2 batteries transferred tonight to 29th Division, Cape Helles.

The coat worn by Col. Rosenthal at the time of the shell explosion on Gallipoli, is
now held by the Australian War Memorial as part of their extensive collection - the
below are a number of images of the coat, showing the extensive pitting &
punctures in the right shoulder & upper left arm caused by shell fragments &
gravel.  The AWM summary states: "This tunic was being worn by the then
Colonel Charles Rosenthal on 5 May 1915 at Anzac when a Turkish high explosive
shell struck the roof of the dugout which he was occupying with a Major Burgess,
one of his Battery commanders. The shell burst upon entering the dugout
wounding him in the back, left arm and right knee. His body suffered a total
of 36 different strikes from shrapnel and fragmentation, with only two being
of a serious nature. It is reported that he was found entertaining other
wounded soldiers by singing Handel's 'Arm, Arm Ye Brave' whilst lying
amid a crowd of suffering men on a hospital ship moored off Gallipoli."
[Courtesy of Australian War Memorial - Damaged Tunic] 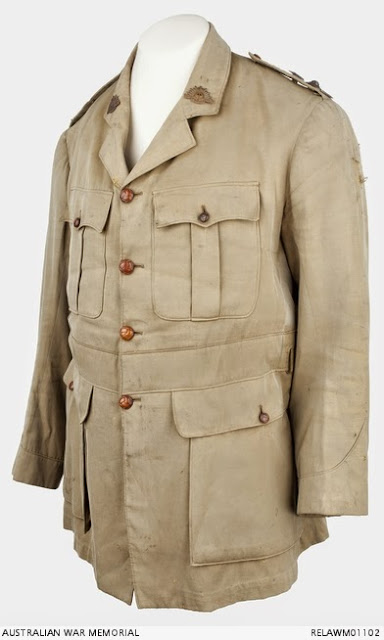 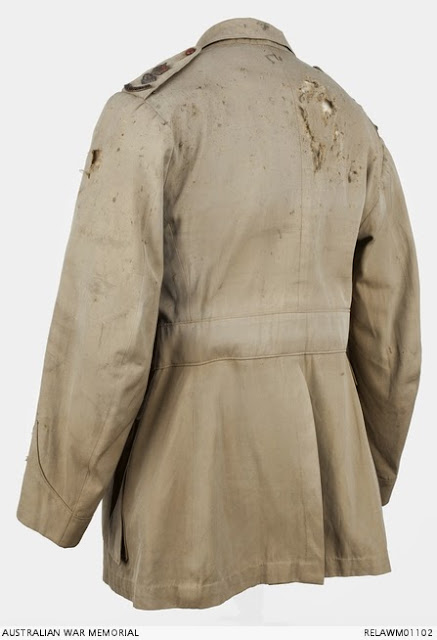 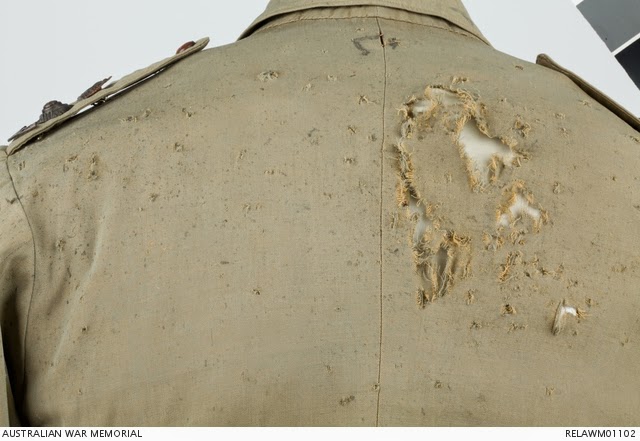 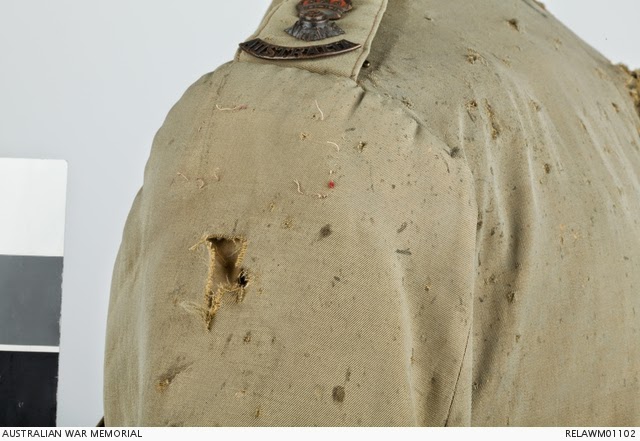