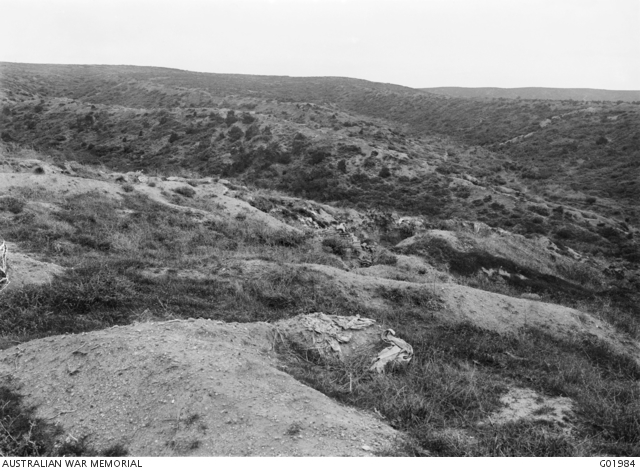 Looking towards the Knife Ridge (Edge) and Gun Ridge, from one of the 3rd Field
Artillery Brigade's gun pits, which took fire fro Turkish artillery (Major Hughes,
below) - one of a series of photographs taken on the Gallipoli Peninsula under the
direction of Captain C. E. W. Bean, during the months of February and March 1919
as part of the Australian Historical Mission, showing rotting sand bags in the
foreground and bricks piled in the central trench.
[Courtesy of Australian War Memorial - G01984]

Enemy’s rifle fire during day + night was slight.  Their Olive Grove guns reopened at 10am + again at 11am but shut up when fired on by Burgess.  In the afternoon one of our aeroplanes dropped a bomb on Turkish Camp South of Olive Grove.


The enemy at 3.30 AM opened a heavy Artillery cannonade from all directions and must have fired over 1000 shell up to 5 AM, when we had managed to locate their batteries and silence them. Very little damage generally was done and very few casualties, but unfortunately two were Artillery officers, Lt Siddall of 4th Battery, and Major Bruce of Mountain Battery, both killed.

Last night a destroyer shelled the approaches from our Right Flank to Gaba Tepe. One Infantry patrol went out and got some useful information, besides bayonetting six Turks and capturing one. Party returned safely.