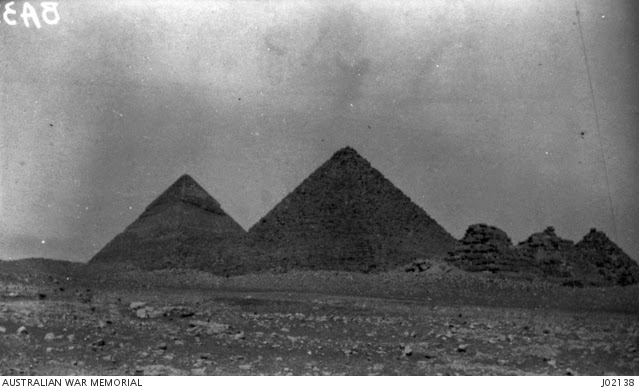 Back to the Pyramids - Mr & Mrs Pengelly (Pengelley) whom Col. Rosenthal befriended
during his time at Mena Camp (& mentions below), are possibly Stanley & Dorothy
Pengelley, who were located in the vicinity of the Pyramids in the later half on the
1910's & early 19120's.
[Courtesy of Australian War Memorial - J02138]


Mr & Mrs Pengelly called to see me, and invited me to come and spend a week at their home. Mrs Pengelly who was trained as a nurse promised to dress my wounds generally. 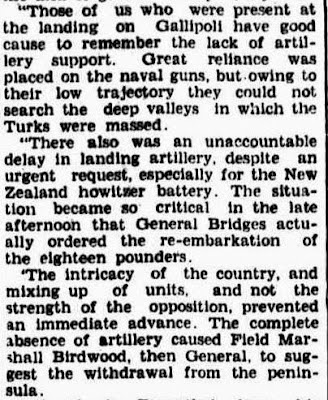 Major-General Sir Charles Rosenthal's public statement through the print media,
as published in the Daily Mercury on the 13th August 1936, regards General
Bridge's ultimate decision to disallow artillery onto the Gallipoli peninsula on
the 25th April 1915.
[Courtesy of National Library of Australia - Trove]


In Col. Rosenthal's absence at Gallipoli, Major-General William Throsby Bridges was struck through the right thigh by a Turkish sniper's bullet.  Having played witness to the A.I.F. landings at Gallipoli, & the rapid Australian casualties incurred, Major-General Bridges frustrated Col. Rosenthal's attempts to land artillery as a priority & ultimately save Australian lives with artillery cover.  Later in the day (April 25th), Bridges would argue for a wholesale evacuation of the Gallipoli peninsula - an argument he would quickly lose.  The A.I.F. was ordered to stay, & Bridges began to pay routine visits to the firing line, showing disregard for his own safety. On the 15th of May 1915, a sniper's bullet struck him in the thigh, severing his femoral artery, & he died three days later on board the hospital ship Gascon. He became the only Australian killed during WWI to have his remains returned to Australia, & was buried at Duntroon.