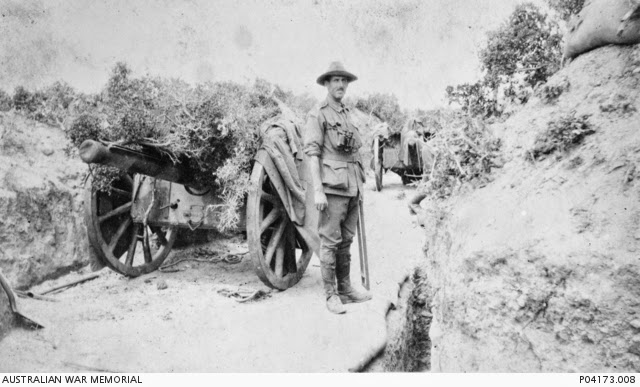 Capt A Jopp replaced Lts Playfair + Clowes as Naval Observation Officer.  Major Burgess assumed command of Brighton Gun + one other gun called Jopps Battery which was placed in emplacement on ridge west of Brownes Battery.  While Col Rosenthal was absent I was acting as o/c artillery of 1st Section in accordance with instruction from Col Hobbs o/c Div Artillery.

This day was quiet except for desultory rifle fire + sniping.  A new gun opened on us about 7pm from direction of ridge 400 but did no damage.  Rained during the day.

Left Cairo at 9.30 AM, reached Alexandria at 12.35 PM. Went to Majestic Hotel for lunch and there met several officers I knew. Could not get much information about the front. Went aboard the "Derflinger" (A.10) at 4PM. Found she was carrying over 2000 troops, and unfortunately I am the Senior Officer on board so have to take up duty as O.C. Troops. Capt McLaughlin 1st Battery is on board, so I have made him Adjutant. Ship is a captured German prize N.D. Lloyd, and very comfortable. We shall be glad however to get back to Gallipoli.