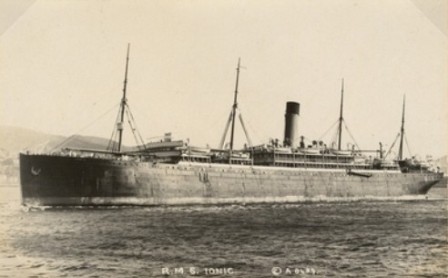 The Ionic, onboard which Col. Rosenthal had a very near miss from a submarine (below).
[Courtesy of Flotilla Australia]

The last day of this great year of Battle & misery I slept well in my cabin last night all from rank of Sergeants up had cabin bunks. It was arranged to have a New Years Eve Concert in the evening & a little liquor was procured for the occasion. The affair went of middling well but I retired early & had a read while in my bunk. It was not a bad journey so far – very smooth & the food air etc.

At 10.30 AM this morning a submarine periscope suddenly appeared about 200 yards from the ship on the Port Beam, as we were about 100 miles S.E. of Crete. Before our stern gun could swing round on it, it had disappeared, and we could distinctly see the trail of a Torpedo from the Submarine coming towards the Ship. The Captain’s bridge is high up and has affine command. He saw the Torpedo coming and immediately swung his helm hard over, throwing the ship to Starboard. The torpedo in consequence missed the ship and passed us about 50 yards astern. "Thank God" ejaculated the Captain. The alteration of course had also the effect of throwing the Submarine itself astern of us. The Captain put on full speed and we travelled all day and tonight at about 151/2 knots. We saw nothing further of the Submarine.

A fully armed guard was maintained around the ship all day and in consequence our Sports programme had to be abandoned. A wireless message was sent out immediately and picked up by a Man O’ War about 100 miles distant. This ship then warned by wireless all ships in the vicinity.

We had a very close call and everybody was quite relieved when darkness came on and gave us a chance to run a straight course with comparative safety.