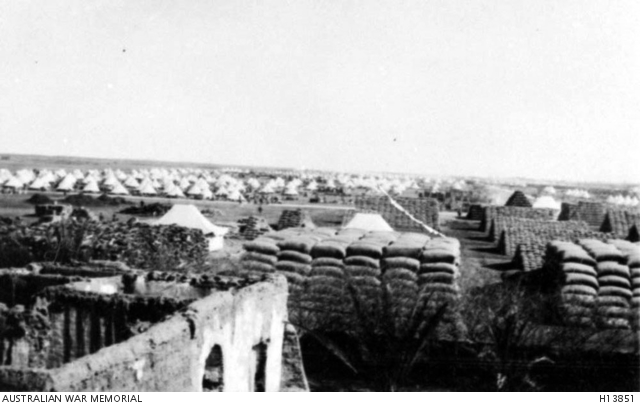 Tel-el-Kebir, the Australian Camp in Egypt reached by Captain Crisp & the first members
of the 7th Battery on the 28th December.
[Courtesy of Australian War Memorial - H13851]

Felt much better. Saw Jack Fowles unloading stores from Wagon. A lot of Egyptians left here to-day. I must say my regard for the Australian Aboriginal has greatly improved since coming into contact with the lower order of the Egyptian race. The character & cleanliness of the Australian Native bears more than favourable comparison. It may be that our natives living in (The scenarios of the world) the roughness of nature are more of nature’s children whereas the Egyptian is the one contaminated by the ages & especially now amidst modern surroundings. We are still waiting for orders to sift from this Island of Lemnos. There has again been rumours of Submarines at work.