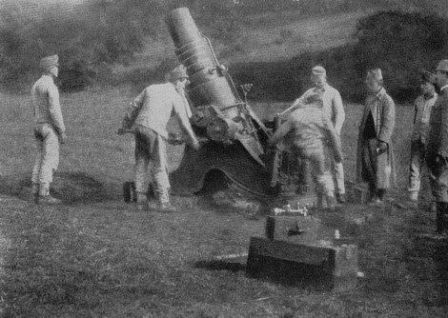 The Austrian K.u.K. 24cm Motormörser-Batterie M 98 No. 9 arrived at Gallipoli on
the 15th November 1915, & fired its first bombardment on the 25th November - this
artillery unit is the "heavy gun" referred to by Major Hughes below.
[Courtesy of Gallipoli Association]

To-day the Canteen Committee fixed Prices of items & a list was issued & orders received from the different units. I opened a few cases to check etc

0530 In pursuance of a request from 2nd L.H. Bgde N° 2 Gun opened fire on BIRD TRENCHES Square 68-L-6 firing 13 rounds of H.E. + succeeded in knocking down portion of the parapets.  One round was a premature.  Three men reported for duty with the Battery + were taken on the strength.

1150 Enemy guns at Square 47-M and OLIVE GROVE fired on Monitors who were firing at the time at other targets.  8th, and 9th Btys fired on OLIVE GROVE.

1630 Enemy heavy gun firing from direction of BOGHALI fired several rounds, falling between LONE PINE and beach.  9th Bty fired on GABA TEPE Observation Stations to upset observation, this is probably the same gun which fire on LONE PINE on 29th November and may be an Austrian Howitzer referred to in recent Divisional Intelligence Report.

1655 OLIVE GROVE fired on beach.  The firing on beach from these guns has diminished somewhat.