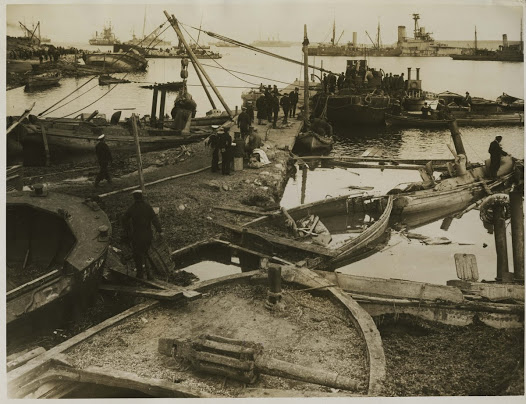 This morning Eltham & I got busy & I marked cases & we managed to get transport down to the wharf. I spent the day getting final matters fixed up & we intended to move things early next day to get aboard if possible. To our surprise the Trawler who had left in the morning came back without taking off any of the cases sent over. Things looked blue for us to get ours away in view of this. We concocted a scheme to try & work ours in on the same boat & to move them early in the morning. I took first watch till about 1 am & instructed Eltham to wake me at 3.45. This he did & we bustled all our stores aboard before any one was moving.

1210 Enemy gun unlocated from the direction of CEMENT EMPLACEMENTS fired towards 8th Bty.

1350 Two unlocated enemy guns from OLIVE GROVE in vicinity of Square 56-Q-4 fired towards Beach, and another gun sounding to be heavier than usual fired from the direction of Square 56-W-1 ASMAK HOWITZER.  The gun which fired at 1210 again fired two rounds at 8th Bty.  8th and 9th Btys engaged OLIVE GROVE.

Since writing the first part of this letter I have to inform you that quite a number of Ipswich volunteers are here in Heliopolis. Jack Mannion out of the railway moulding shop and H. J. Woodford, from Booval, have just joined up with their unit, the 2nd Light Horse, 1st contingent. Mannion was badly wounded, and is down for light duty in Egypt, but he states that he is trying to get away with the next draft. R. Mulvihill, Sergt. Alf. Perrett and Richmond, are here, also Sergt. Turley. I have much pleasure in telling you your son (driver B. J. Barker), has been further promoted to Corporal. We are trying to get all the Ipswich volunteers together to be photographed at the Pyramids next Sunday, as we have found another in young "Charlie" Sharp, of Bundanba.

Published in the Queensland Times, on the 1st February 1916.
[Courtesy of National Library of Australia - TROVE]