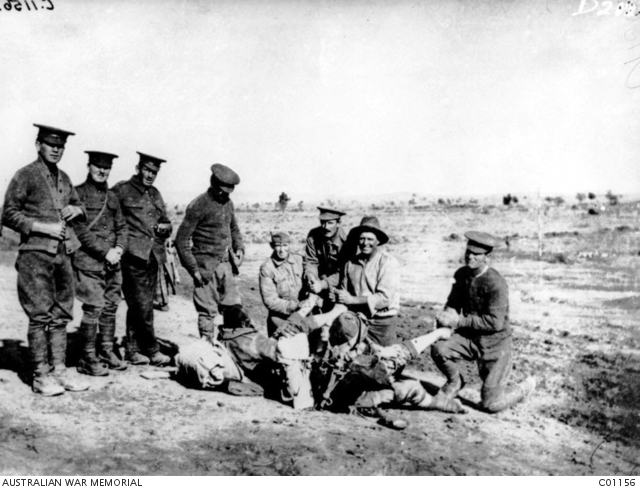 Australian troops attempting to restore circulation to Gurkhas' frozen feet, near Walden
Grove at Anzac, December 1915 - Will Sparkes paid witness to the Gurkhas' predicament
(below) when heading to the beach on his way to Imbros.
[Courtesy of Australian War Memorial - C01156]

I was busy fixing up matters in connection with the stores & word came through that we could send over a representative to Imbros again. This we decided to do & I was chosen to go over & represent Divisional Artillery. Things were very hurriedly arranged & I had to pack up & get a little dinner & hurry to get the Steamer. I saw several sad sights on my way. There were a number of poor Gurkas & others who had been frost bitten on their feet & could not walk. They had to be carried on to the Pier for transference on to the Hospital ship. It was a nice crisp trip across to Imbros. We called in at Cape Helles & went right round into the Straits. We saw the ruins of Sed dol Bah Fort and went in near the Aiasiatic Coast. The celebrated SS “River Clyde" which was run ashore full of Troops was on the Beach a monument to the many brave lives that were lost in the landing which was effected from her. Every one will remember how she was run up & all her sides opened to provide a quick exit for troops. Unfortunately the “Clyde" did not beach as expected & it meant certain death to go out on the planks provided for the landing on the lighters. In the Walls of the Fort were huge holes which our naval Guns had  hewn out with their powerful guns. When we departed from Cape Helles it was almost dusk & it was not long before the scene of the war zone on the Peninsular faded from view.

We were not long getting over to Kehopalos as this part of Imbros is called. It was dark – I soon found Eltham a Gunner from our Brigade who was over with Captn Edwards as I said before in my notes days ago. I made myself comfortable in his tent – got blankets etc.

1050 North Section of WINE GLASS fired on our RIGHT FLANK.

The enemy are doing considerable amount of digging and Trench work on GUN RIDGE.  Working parties observed in several positions in vicinity of SQUARE 68-R-4.

The increase in enemy gun fire during the last week would indicate that he has received considerable addition to his ammunition supply.