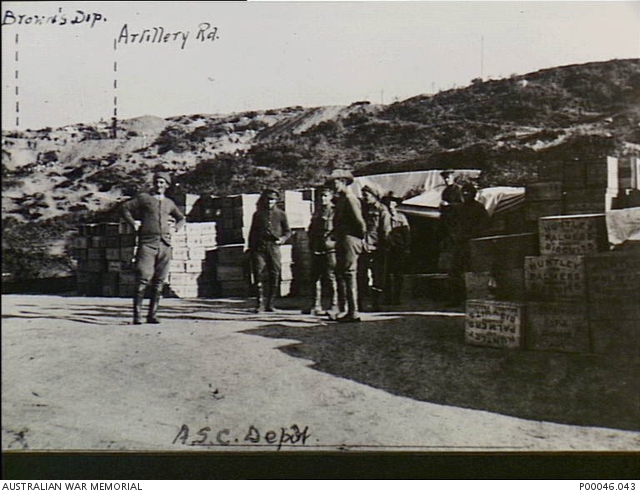 It was overcast to-day & things were a bit quiet. There was a little shelling late in the afternoon & “Beachy" was active till well on in the evening. I went down to the Lowland Battery and had tea with QM McLaren & SM Burrows. I found SM Scarrott of our Headquarters. He was supposed to have left for Egypt the previous evening with despatches but the boat did not go.

I said “good Bye" in case our Unit might be called away at any moment. Things are still very unsettled several of our guys have gone away & a batch of men. There are wild rumours that there is to be another landing etc. One hardly knows what to think.

While on my way to Ordinance this afternoon I found that there was a free distribution of anything one required. There was about 200 men ransacking the stores there & it was amusing to see the Punjaubies taking away a dozen pairs of boots. The waste was really shameful & I consider a systematic distribution could have been made & ensured that those who required these items got them. In view of the usual red tape formalities to get Ordnance goods in this part when men really required clothes it seemed very ominous that they were now giving them away – apparently so as to not to have the trouble of taking it away. It seemed cruel to have to leave the place after the severe losses of men & misery we have had. The landing & our attacks were great feats of arms but the mistake made was to keep us waiting till the Troops moved up from Cape Helles. In my notes written in May last I mentioned we were waiting. It has proved a costly wait & a great failure in leadership.

1010 Enemy gun from OLIVE GROVE again fired towards beach and continued until 1100.

1330 Enemy gun from OLIVE GROVE which fired during the morning again fired , and the 68-W-1 gun fired on Right Flank.

1400 Enemy gun from left of ANDERSONS KNOLL fired over Right Flank and our Heavy Bty fired a few rounds over GUN RIDGE.

1625 Enemy heavy gun unlocated from direction of OLIVE GROVE fired a few rounds on LONE PINE and on beach.  This gun did not fire earlier in the day.

Throughout the day close observation was kept for the enemy gun which was firing on the beach but it could not be definitely located.