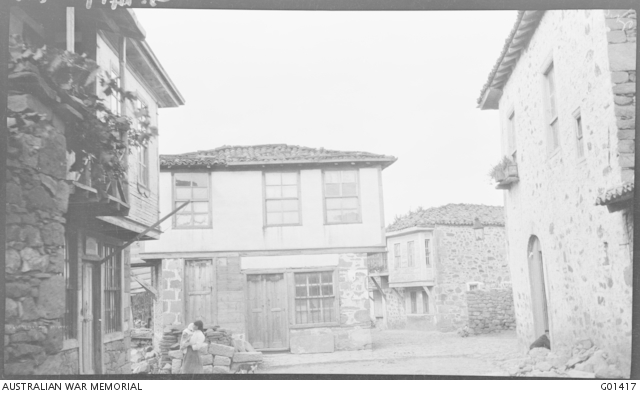 Captain C. E. W. Bean - "A scene in the little town of Panagia, which could be reached
within three hours from Anzac by the very few who had the chance of making the visit."
Will Sparkes was one of those luck few (below).
[Courtesy of Australian War Memorial - G01417] 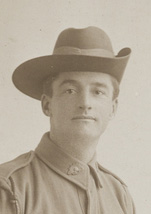 
We asked them to join us they said they would welcome us to their table which was in the only sitting room. We had a jolly good time until about 11 PM & then as there was only 3 beds & a sofa we had to go to a cottage & sleep there. Our bed proved to be a long one on the floor. Mattress laid out & we found 3 Tommies already in bed. We were not long in getting into bed but I could not sleep & morning dawned but I had hardly closed my eyes.

I got up and managed to obtain a bucket of hot water from the good housewife. Of course she could not speak English & it took a lot of explanations to make her understand. Again refreshed I made a good breakfast on fried eggs & then I went out purchasing. I left everything cased up ready to take away after dinner. Dinner over & Partridges enjoyed again I secured 3 Donkeys & went out to get my stores. We had previously ordered 8 Donkeys & the others were to take the balance. I got my Mules loaded up & the others seemed slow so off I went. When once the Mules are loaded they must be on the move otherwise the burden is too much to stand. I had 4 with my cases & I felt fairly well satisfied with my purchases. I had to walk alongside the Donkey as they picked their way over the hills & down valleys & it was dark before I arrived. I must say that the cleanliness of the Greek Houses impressed me. One scene in the street interested me & it was the settlement of a dispute. It was in the Street & the Governor seemed to be the Arbitrator.

To-day was the commencement of their fasting extended till over Xmas – the great 40 days fast & early in the morning I noticed a goodly crowd of women folk coming out of the church all carrying their tapers which I was informed they purchased there & carried home to burn before their own little altar.

One man evacuated to hospital sick  The Battery did not fire.

0910 The enemy works at Square 68-R-2 engaged yesterdays by 8th Battery were again filled with Turks and were again effectively engaged by that Battery.

0925 Enemy gun from the direction of the Left of ANDERSONS KNOLL fired on 8th Bty.

1125 Enemy gun from OLIVE GROVE fired on the Beach.

1130 Enemy unlocated gun from the direction of ANDERSONS KNOLL fired on our Right Flank Trenches.

1230 OLIVE GROVE Guns again fired towards Beach and kept up a steady fire throughout the afternoon.  8th and 9th Btys retaliated.

1400 Our Navy commenced a heavy bombardment North of KRITHIA.

1459 Enemy 75 Gun from direction of Right of SCRUBBY KNOLL fired on our Right Flank Trenches.

1620 A large enemy transport moving South on KILID BAHR ROAD, consisting of a few wagons and string of pack mules about 300 yards long.