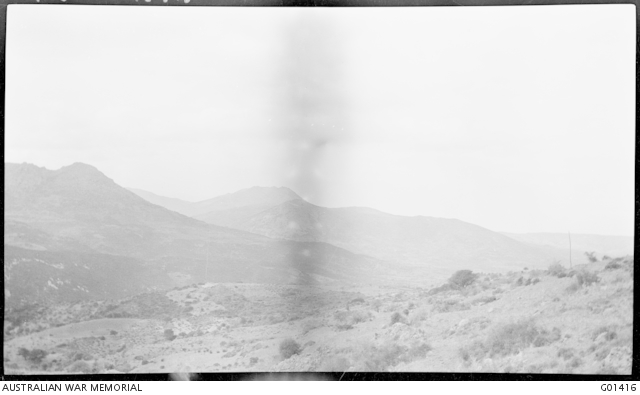 The road to Panagia, the town two hours' journey over the hills from Kephalos,
to which Will Sparkes journeyed after landing (below).
[Courtesy of Australian War Memorial - G01416]

To-day I made up my list & as Lieut Sparrow in charge of our Party was going to Panaghia I arranged with him to include me in his party on the pass which had to be obtained.

I omitted to mention change in Imbros. The ravages of the storm could be seen. The Egyptians gone etc

I left list of goods to be got at Canteen with Eltham & we made a start for Panaghia about 10 oclock – Lieut Sparrow, Sergt Warner (N.Z. Artillery) Sapper Bates (6th Brigade) & myself. We decided to walk in place of riding Donkeys & I quite enjoyed the trip which proved very exhilerating indeed. Up over the hills – down rocky pathways & ravines. The sky was overcast & the clouds were low – quite enveloping the high peaks & as we passed through them we got quite damp. We passed some Greek hamlets. Built of rough stones but they looked comfortable. Here & there were spaces in the Valleys which were cultivated & the old time custom ploughing with Wooden Planks & oxen could be seen.

It was a lovely scene as Panaghia came into view. We had just mounted from a valley to a high ridge & down below lay the village on a flat piece of land & beyond it could be noticed the sea. Hills surrounded the place except the opening towards the sea. We had really travelled right across the island. The village was just a collection of rock houses with red tiles & interspersed were the tall Poplar & also Olive trees. The contrast of red & green was very striking after the uninteresting view of trenches one had been used to of recent months on the Peninsula. As we entered the village the path lay through an avenue of Olive trees. The streets were laid with large big stones. We sought out the hotel called the London over which an Englishman who was called Jim presided. It only had one bedroom & one sitting room upstairs & the kitchen was downstairs somewhere. On the landing upstairs there was a little round table to seat 4 & we promptly confiscated this & ordered dinner as our appetites were keen to a degree after the walk which took us 2 hours. The dinner was good just imagine Partridge baked in the tenderest of Mutton or was it Goat & potatoes after which a sweet omelette was served. This with a little wine & fruit finished our feast for such it was after the daily menu over at Anzac.

I was delighted with the Greek children who crowded the principal street. Their quaint little faces smiling with dark eyes was pleasant to look on I had a hair cut 7 shave after dinner & felt quite refreshed. We went into the few shops that Panaghia boasted & some of our party made purchases. I was content to take notes till the following day & I afterwards found it was the best procedure as I got the best values & low prices – the competition in the little place being very keen. During the afternoon the children came trooping out of School & what memories that brought back to me with their happy gambols.

At tea we had another spread & several Imperial Subalterns who were staying at the London came along & gave us nuts mandarins & figs & in their own words “Let us have a dam good feed". We got a few bottles of fiz (Champagne)

1130 Scattered movement of enemy in vicinity of Square 47-M.

1500 Enemy troops cleared Sap retiring back over GUN RIDGE . Scattered movement observed after this in Sap, 8th Battery shelling apparently very effective.  Estimated number of troops from 300 to 400, misty weather settled down after this and no further observations could be made.