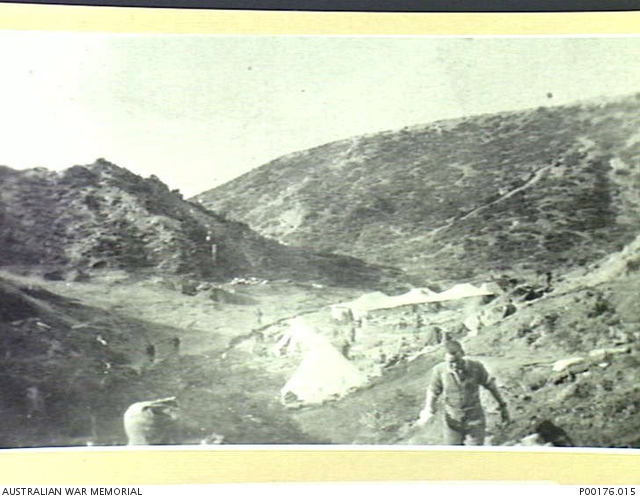 
The Ammunition Column was still to be served & I fixed them up this morning after the Anti Aircraft Gun. There was a good deal of excitement in air last night & to-day owing to a number of guns being ordered away from here & also men. They were to have gone last night but it was cancelled at the last moment. QMS McLaren came up in the afternoon & I went along Beach with him to pay a/c of Canteen Stores & also to cash cheques for him. He enticed me along to his quarters for tea. I returned about dark.

1400 Received orders for party detailed yesterday to be ready to proceed at a moments notice.

1815 Received orders for party to proceed to Beach 1 N.C.O. + 9 men.  This was done + men reported to Lt Clowes 8th Battery who assumed command of the Gun + equipment.

0910 Enemy gun from our Right fired on beach.  Unlocated.

0945 Enemy gun again fired from our Right on beach.  Unlocated.

1010 Enemy gun from direction of Left of ANDERSONS KNOLL fired on Right Flank.

1205 Observations were asked for by 17 Seige Bty on WINE GLASS RIDGE, which were carried out.