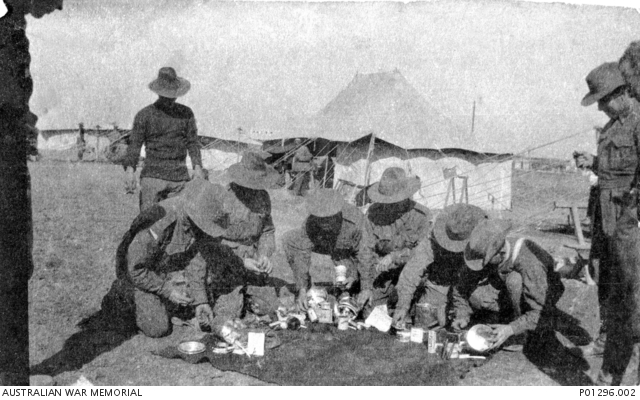 A group of six Australian Soldiers unpack the contents of their Christmas Billies on a
blanket spread out near their tent lines on Lemnos, December 1915.
[Courtesy of Australian War Memorial -P01296.002]

To-day was warmer & an ideal Xmas Day. I was indisposed & cold not look at dinner, cooked in the evening. I went up to see Dr McCardle & got a prescription.

Nothing would stay on my stomach & I had windy spasms. In the evening our chaps got some whisky & this made me feel a little better.

Miss Eva Dawson, "Hanley," Masters-street, Valley, is in receipt of a letter from Driver F. J. Harman, 7th Battery, A.I.F., now on active service, with regard to the billycan which was forwarded under the "Courier" billycan scheme. He writes: - "I now take the opportunity of writing you a short note to thank you for your Christmas billy, which opened up to perfection, and could not have been better. You tell me not to get sick on the chocolates, and I must say I have not, nor likely to. In another three days we will have our Christmas dinner, and I hope on that day that your pudding opens up the same as the others. You ask me to wipe off a few Germans or Turks, not particular which. I will have a try for both lots. I have written this with your own paper, with your own pencil, and inclosed with a whiff of your cigarette. I am a Brisbane boy, and come from Russell-street, Clayfield."

Mrs. J. Mitchell, St. Elmo, Oxley, has received acknowledgement from Gunner A. Shield, D subsection, 7th Battery, 3rd A.F.A. Brigade, of the receipt of a billy-can. He writes to "let you know of the cruel fate your Christmas billycan met at my Christmas Eve supper. The contents were in perfect condition, and I feel sure that if you could only have witnessed the joy and satisfaction with which these cans were opened, you would have felt that all your thought and trouble in helping to prepare them, had not been in vain I sincerely thank you for your kindness and consideration, and I only wish that this letter could give you as much satisfaction as your Christmas puddings gave to my mates and myself."

Published in The Telegraph, 17th February 1916
[Courtesy of National Library of Australia - Trove]

Mrs. W. Watson, Howard, has received the following letter : — "Tel-el-Kebir, 20/1/16. — Dear Madam, — I take much pleasure in answering those few helpful words in which you bid us have a happy time at Christmas and New Year, and to thank you for the billy can which I had the pleasure to receive on Christmas Eve. It was a very kindly thought; one that was appreciated by the boys, and helped to pass the time that was saddened by the thought of having evacuated a place that holds so many memories, as well as being the last resting place of so many of our Australian boys. I have been lucky, having been over there for five months and did not receive a scratch, but was sent away sick. Our battery has done fairly well, but lost a good few men.  However, in the next job I hope we will get a fighting chance to win out, and end this war, for I think most of us are longing to get back to dear old Australia and civilisation. Again thanking you for your kindly gift, and hoping that this year may be a prosperous one for you, I remain, yours etc., Gunner W. G. Teerman, 2316, Intermediate Base, 7th Battery, A.F.A. Egypt."

In common with many other Ipswich citizens, Mr. W. Bryan, of Messrs. T. C. Beirne and Co., has received a letter from the recipient of a billy-can, sent by Mr. Bryan to help cheer the Christmas season for the men at the front, of whom we are all so proud, and, incidentally, in connection with the reception of the gift comes an interesting story. Mr. Bryan has a son at the front, and it so happened that the billy-can forwarded by Mr. Bryan was allocated to the Battery of which Gunner W. H. Bryan is a member.  During the distribution of the gifts it came to the turn of Gunner O. Egerton to receive a can, to which there was a note attached. Gunner Brian was standing nearby, and a closer look at the caligraphy on the envelope brought the exclamation from him, "Why, that's my day's writing,"Sure thing, it was. Gunner Bryan wrote, informing his father of the occurence, and this has since been corroborated by the recipient, Gunner O. Egerton, who writes thus :-"I am writing these few lines in answer to your kind letter ; also to thank you for the billy-can, which I received quite safely. I have met your son, and he was very pleased to see the note you sent. He seems to be in the best of health. We are all very grateful for the kindness which has been shown to us by all of you at home. This is my second Christmas in Egypt now, and, I hope, the last, as we hope to be back again for the next occasion."

Among the host of letters received by the Toowong Girls' Patriotic Club was one from Pte. R. E. Allen, 7th Battery, 3rd Brigade, F.A., who instanced the surprise of the men at an unusual after-dinner parade, and proceeds: "We had not long fallen in before we noticed six waggons coming towards us packed with cases. We noticed through some of the cases the billies already mentioned in the Australian papers . . . A motor car came upon the scene of operations . . and the boys marched past in single file and were each handed a billy by Lady Carrington"

An interesting letter has been received by the children attending the Blair Athol State School from Driver Dailey, of the 7th Battery, A.I.F. He writes:- "I received the billycan sent by you for the Australian troops over here, and was very much surprised on opening it to find all the luxuries it contained. I never thought a tin could hold so many good things. I watched a good many billies being opened, but I don't consider there was any that came up to mine, either for variety or usefulness. It cheers a man up a lot when he sees that he is not forgotten by the people he left behind in Australia, and I know that all you children will come, too, when you are old enough, if your country needs you, but I hope it won't."

My Dear Miss Kinbacker, — I was the fortunate one to receive your Christmas billy on the 22nd December, which I appreciate more than I can express in words. It was very nice, and I thank you very much. It brings back recollections of dear old Queensland. I am sending you a small present by the same mail, and I hope you will like It. I will send you something better, later on if I get a chance. We do not know from one day to another when we will get a move on, and I can assure you a soldier's life is not all honey. I could tell you a lot if I had space or time. We have a young fellow in our battery named Harry Rickards, from Maryborough, and he thinks he knows you. Four of us had our photos taken in front of our tent with the billies in our hands, and I will send you one when they are ready. You mention ju-jubes, but there was none in the billy. I hope to come back to Queensland and keep you to your word to boil the billy for me. Wishing you a happy new year and the best of luck. — Yours sincerely,

Just a line thanking you for a billy-can which was packed by the Maryborough Sock Society, and received with many thanks by No. 5348, Driver T. F. Morris, 7th Battery, 3rd F.A.B., Intermediate Base, Egypt. Wishing you and your society every success and happiness. — F. Morris.