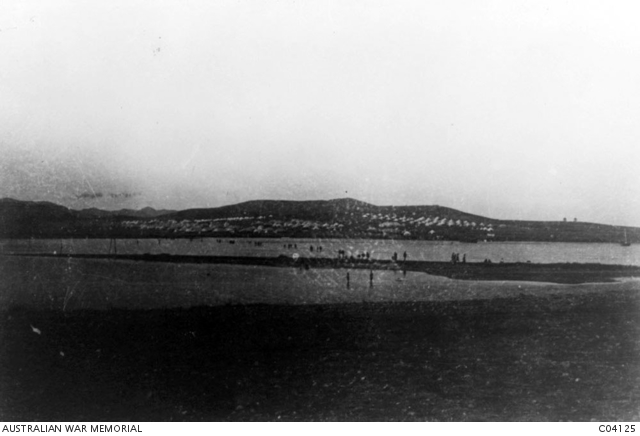 Sarpi Camp from across the lagoon, Lemnos.
[Courtesy of Australian War Memorial - C04125]

Still at Sarpi Pier. The weather is delightfully mild for Winter. No news of our leaving yet – an Officer was placed in charge over the different Baggage Parties now camped round the Pier etc.

Wednesday 29th December
Left Port [Malta] at 8.30AM. As we passed between the French Battleships our band struck up the "Marseilles", "God Save the King" and a number of patriotic airs, while the band on the French Flagship played "Tipperary". Very hearty cheers were given by both French sailors and our troops. We are now moving without an escort. Passed several ships shortly after we left port, including a Hospital Ship and a French mailboat. Competitions, boxing, wrestling, deck billiards, deck quoits etc continued. Boat stations practised. Guard mounted against possible submarine attack. Course set Northwards. Mt Etna visible covered with snow. Played draughts at night with majors Vernon and McIntosh.