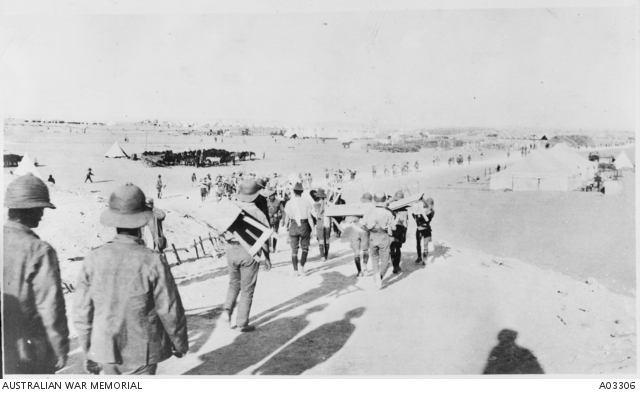 Soldiers carrying equipment for setting up camp at Tel-el-Kebir - tents are in the
background & horses are tethered to the left.
[Courtesy of Australian War Memorial - A03306]

Another smooth day. We had an escort of Torpedo Boats etc & we were credited with having 7 Generals on board including 2 Lords. A submarine was sighted & it created a good deal of excitement but no Torpedo was fired at us & she got away. It was wonderfully calm. Had good dinner & returned early.

Very close watch kept all day for further submarines but nothing seen. Arrived at Alexandria at 12.30 PM. Anchored in outer anchorage. While at anchor a Mine Layer passed us, bringing in what appeared to be a number of survivors from a wreck. Took several photos. Appended is a copy of Log entry by Capt. Davies R.M.S. Ionic concerning the attempted torpedoeing of his ship:-

At 9.40 am Lat 34° 11’ N Long 25°11’ E sighted the Periscope of a Submarine abeam on Port Side about 500 feet away. We immediately put the helm hard a port and brought the submarine right astern. As the ship was swinging the submarine fired a Torpedo, but passed astern missing the ship by about 100 feet, the same being visible for a considerable distance after missing the ship. Lost sight of the Submarine periscope after bringing her astern. Signal given for all hands Boat Stations, everybody being at their Stations in 3 minutes. Signalled engines to utmost speed and kept submarine astern. At 10.40 AM dismissed boat Stations. Extra men in stokeholds up till noon.