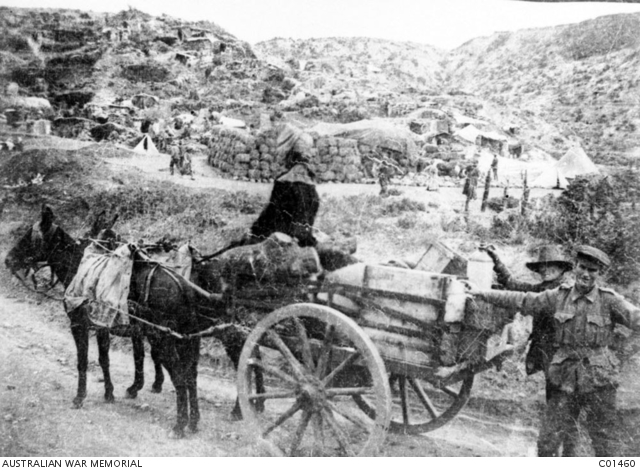 Unidentified soldiers stand behind a horse-drawn wagon loaded with supplies, near an
encampment of Indian troops in a gully on the Gallipoli Peninsula in November 1915.
[Courtesy of Australian War Memorial - C01460]

About 7 am our Trawler was off and we settled down to the trip. Called at Suvla first and it was a crisp nice trip. I was tired & slept most of the time. Were off to Anzac & arrived about 12.30 & waited patiently for a Horse barge to come out to tranship our stores to. Unfortunately they were all engaged & only small Pinnaces came & a few cases were taken ashore. I made a bid to get a few on only got 7 on & those I took ashore & left Eltham with the others – the Trawler having to back again to Imbros at her usual starting time. The fatigue party was waiting & I had a little tea with McLaren (Lowland Bty) & left cases with Ammunition Party. I went along to Olly Gunderson to arrange to get some coal put on wagon we passed along at night. After dark I waited for the wagon & met the horses & Drivers coming back having left the wagon as Pole had been broken. It was the first misfortune since I arrived this time but was followed up later with another one more serious. I telephoned to headquarters about accident & a Limber was sent down. On this I put some cases etc & the balance was carried by the party. On travelling up a narrow road on one of the ridges the Limber was taken in too loose & she turned upside down & nearly rolled down the hill. As the Limber commenced to turn over I let myself go & went down the hill till caught on some roots etc & they pulled me up. I was not hurt – only scratched - & I it was a miraculous escape on the limber – was right upside down one of the drivers also went down the Hill & twisted his leg & his horse was down. We had great difficulty in extricating the horses & it was exciting for some time. I was pleased the affair turned out no worse than it was. After a wash when I arrived at Headquarters I felt refreshed again & it was not long before I was in bed in my dug out.

1025 Enemy heavy gun from the direction of ANDERSONS KNOLL fired on the left of F.C.O.  Unlocated.

1430 Enemy gun from Northern Section of WINE GLASS Fired to the left of F.C.O.

1445 Enemy guns from the Left of ANDERSONS KNOLL fired on 8th Bty.

1540 A large enemy transport on KILID BAHR ROAD which consisted of horses and camels, going South.