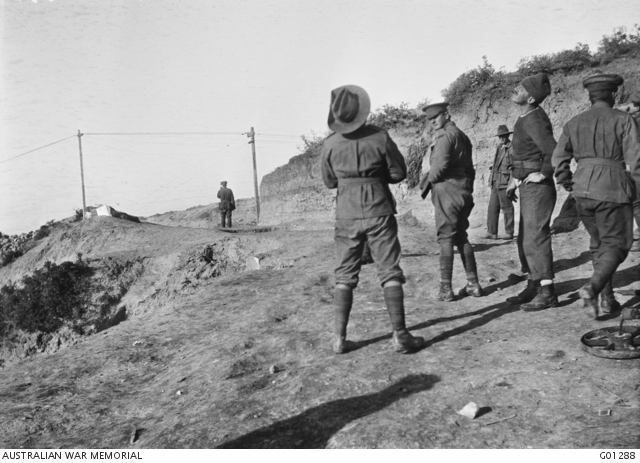 17th December 1915 - To prevent the Turks noticing the emptiness of the roads, fatigues
were put on at various points visible to the enemy with instructions to lounge about & smoke.
The Turks observed these fatigues & shelled them.  At rear of the fatigue in the distance, a
hole made by "Beach Bill" can be seen.
[Courtesy of Australian War Memorial - G01288]


Our Steamer went up close to the Headquarters Steamer & received instructions & soon two Barges were alongside – one to take the men from other units off & the other for our Baggage & Party. It did not take very long to get the lot of stuff on her & off we went to the shore & were dumped onto a wharf. There were other Units besides those over which I had charge (the 3rd F.A. Brigade Headquarters 8th – 9th Batteries & Am Column). Every ones baggage got mixed up horribly every time we moved from one place to another and then it was a case of sorting out & seeing what was missing. Once on shore I interviewed the M.L.O. (Military Landing Officer) & we were shifted by means of transport to another wharf & he told me we were likely to leave for Egypt in a few days & the Baggage would not go into the Sarpie Camp – the place where our Units were joining up after coming away in small batches. We made ourselves as comfortable as we could near the South Pier (wharf) as it was called & waited instructions. I sent word to Sarpie Camp & got a few extra men down to guard the Baggage etc. They came down & walked over there & slept for the night. Saw Walter East & Hodgens & ohs.

1015 Unlocated gun was firing on beach.  It ceased + Obseving Stns were engaged.

There was the usual enemy artillery activity to-day, but no guns in our zone were observed to fire.  Big broomstick bombs were last night + today falling near this Stn. VICTORIA GULLY + BROWNS DIP.  Hostile machine guns still continue to play all along this ridge near this Station at night + during foggy weather. 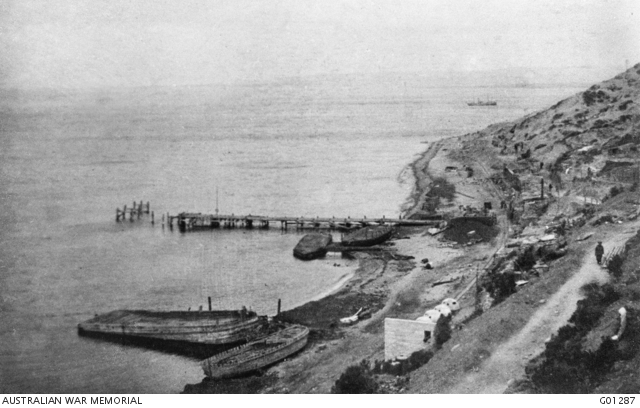 During the last days of the evacuation, Anzac Beach was utterly deserted, but fortunately
Turkish airmen, flew too high to notice this - taken 17th December, 1915.
[Courtesy of Australian War Memorial - G01287]