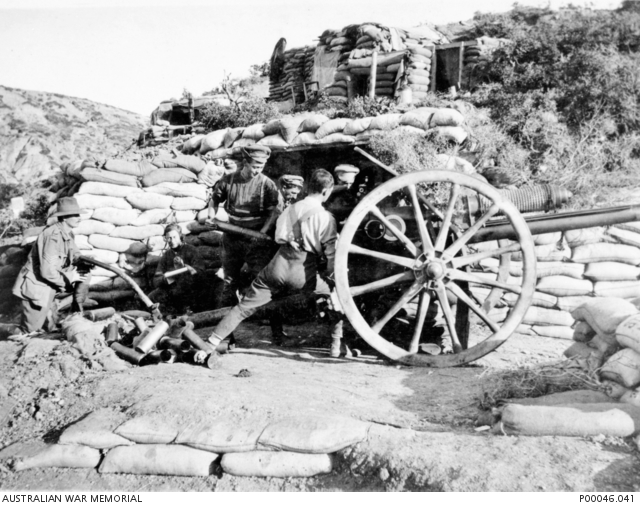 The 9th Battery of the 3rd Field Artillery Brigade, loading their No. 1 gun - being their last
day on the Gallipoli peninsula, they were using all their ammunition at timed intervals so that
it was expended by the end of the day.
[Courtesy of Australian War Memorial - P00046.041]

It looked overcast to-day and I am dreading any rain. The evacuation still continues and batches of men are arriving from Anzac & Suvla here every day.

I do not know where our Guns have gone but assume they have gone on to Egypt. We are now living well – cooking good & plenty of extras we can purchase. 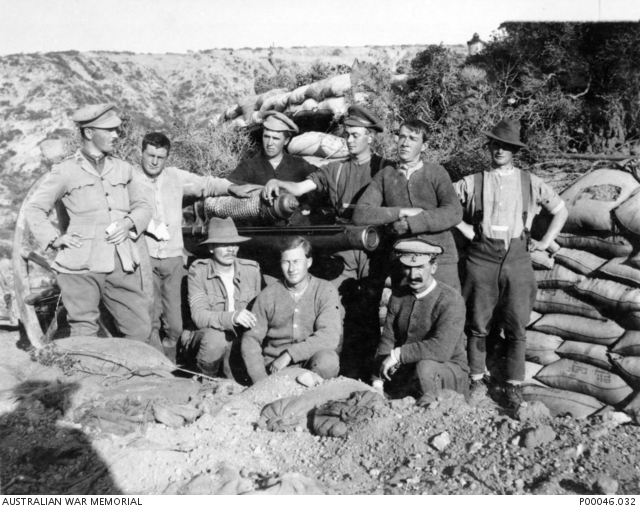 Informal portrait of the crew of the remaining gun of the 9th Battery, 3rd Field
Artillery Brigade, on the day they were evacuated.  They are standing beside their
18 pounder field gun (No. 1) dressed in assorted pieces of uniform.
[Courtesy of Australian War Memorial - P00046.032]

Groups of men standing on parapet.  These may have been detachments from OLIVE GROVE guns.  Our first 3 rounds appeared effective + party dispersed.

This morning heavy shells from long range came from about due E. + fell on LONE PINE + BROWNS DIP.  From fragments found they appeared to be 12" armour piercing shells.  Casing was of hard steel + head sharp pointed.  The explosion of these shells was very powerful + stones + fragments were thrown from BROWNS DIP into the sea..... In accordance with instructions received our last gun (No. 1) was stripped of breach block + sights + disabled at 2215.  A charge of 4lbs. of gun cotton was placed in breach + 2 lbs. in hollow hail.  Fuzes were lighted + gun was destroyed successfully at 0305 on 20th inst.  The remaining 2 Officers + 10 Other Ranks safely embarked for Mudros.