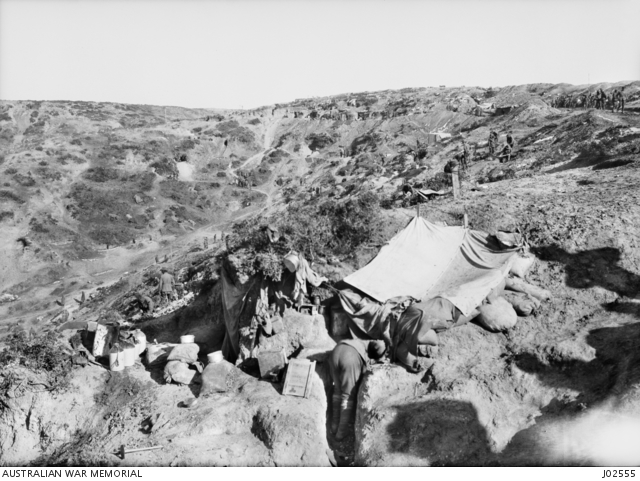 Dugouts along Artillery Road at the top of Victoria Gully, in December 1915 - Will
Sparkes unloaded his canteen supplies near here, before they were carried through
to Headquarters (below).
[Courtesy of Australian War Memorial - J02555]

To-day I went down to Pier to meet Gunner Eltham & we took the cases ashore this time safely. Wagon was loaded up & the broken Pole had been mended during the day. I let Eltham go to his Battery & get a change & wash & I stayed on & had tea with the Lowland Battery Q.M.S. McLaren. When the Horses arrived after dark to take the stores we started on our round journey to Headquarters. We had to unload a number of cases at Victoria Gully & then took the others up to the top of ridge & unloaded there. With a big fatigue Party the cases were carried up to Headquarters. Unfortunately one of the Ammunition Column got away with a case of milk & we had other losses in items getting broke etc

The Battery did not fire.  One man rejoined Battery from Hospital.

1130 Enemy guns from OLIVE GROVE fired at intervals along the Beach.  Unlocated.

1420 First Infantry Brigade reported that enemy were moving heavy guns South of OLIVE GROVE, an officer from 7th Bty and Bde Forward Ob.Officer visited Observing Post of 3rd Btn from which the movement was observed.  The observer stated that the guns were drawn by four horses (White) teams and left OLIVE GROVE after two rounds from Navy and disappeared in fall in ground estimated at 48-M.  None of our Observers had seen these guns although horsemen were seen leaving the GROVE on white horses.

1550 Ships fired two rounds in vicinity of Square 48-M but as no target could be observed by spotting officer he informed the Navy accordingly.  The ships then fired a few more rounds.