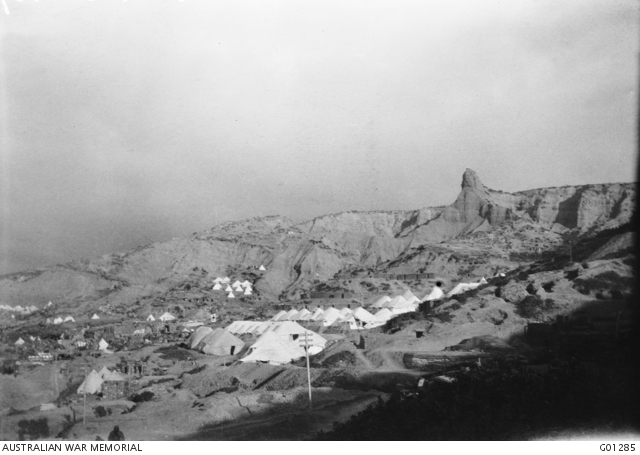 In order to deceive the Turks, all hospital tents were left standing as usual but all equipment
was removed except from two, in case of casualties - taken 18th December 1915.
[Courtesy of Australian War Memorial - G01287]

My sleep was a good one last night notwithstanding I did not appear a welcome visitor in the Sergeants tent in which I had to rest. They tried to crowd me out. After Breakfast I packed up & went back to the Baggage it the Pier. I went to the Canteen & got some tinned fruit etc for the Guard & also got some Beer which I had to manage with a little bit of diplomacy. We fared well in cooking stuff & I had a game of Bridge with the 2nd Batallion Corpl & Corpl Preston & another comrade.

[Author's Note:  At this point, the 7th Battery's Unit diary under Captain
A. P. Crisp falls silent, as the men transfer through Lemnos for Egypt.]

At 1705 2 very heavy shells came from about due E. + dropped unexploded near LONE PINE.  In accordance with orders 8 more N.C.O.'s 1 men embarked to-night.  There was much bomb + rifle activity on Rt. Flank this evening.