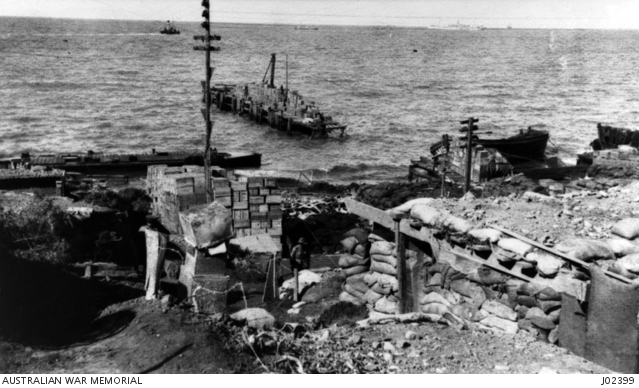 During rough seas caused by the storm of the 8th October 1915, several of the water
barges which supplied ANZAC with water were grounded on the beach.  In the foreground
can be seen two barges ashore and the damage done to Watson's Pier, which lost forty feet
of trestle construction.
[Courtesy of Australian War Memorial - J02399]

It was a delightful morning after the rain. Of course there was plenty of mud about & you could see traces of the storm which had just abated. In the afternoon I went to Ordnance & on the beach there was a fearful muddle. The various jetties & landing stages were carried away. Barges & small vessels were high & dry on the sand. Biscuit boxes & others were strewn all over the place. The debacle could not have been better completed by the heaviest of bombardments.

The sea was still a little angry as it lashed into spray against the rocks & barges on the sandy beach. One could hardly call the storm a very big one yet the damage was enormous & if the weather did get very bad here we shall have a very trying time as stores & water could not be possibly landed.

1900 New alternative gun pit continued with. Work could not be completed as sufficient sand-bags were not obtainable.

0750 Traffic on road at foot of KILID BAHR going North and South.

0830 Party of horsemen on road at foot of KILID BAHR going South.

1535 Gun from RT.SEC.OLIVE GROVE firing on our RIGHT FLANK.