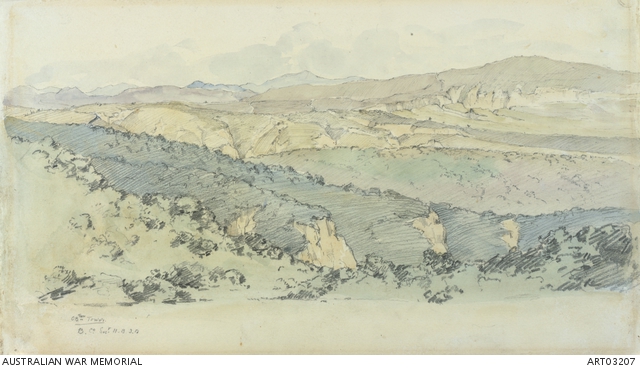 Panoramic landscape view of the Turkish position at Gallipoli, showing the road to Maidos,
Camel Hill & Wine Glass Ridge (on which the 7th Battery fired) - this work was drawn in
May, & a few weeks later the visible ridges in the work were a mass of Turkish earthworks.
[Courtesy of Australian War Memorial - ART03207]


It was cool to-day. A surprise was in store for me as about midnight I was awakened by voices & found Corp Coleman & QM. Augusteen at my dug out door. They had just come back & were looking for somewhere to bunk. I thought it cool of our QM to wake me up by coming in & striking a match.

The Battery did not fire.  Lt. Ross + two other ranks rejoined Battery.

0957 Party of horsemen to left of ALMOND GROVE going South.

Men have again been noticed constantly moving moving about position in vicinity of SQ. 38-B & C.

Instructions were received to spot for 3rd.Battery firing on WINE GLASS BATTERY.  Only one round was fired at this target presumably by 3rd.Battery after which they ceased fire.