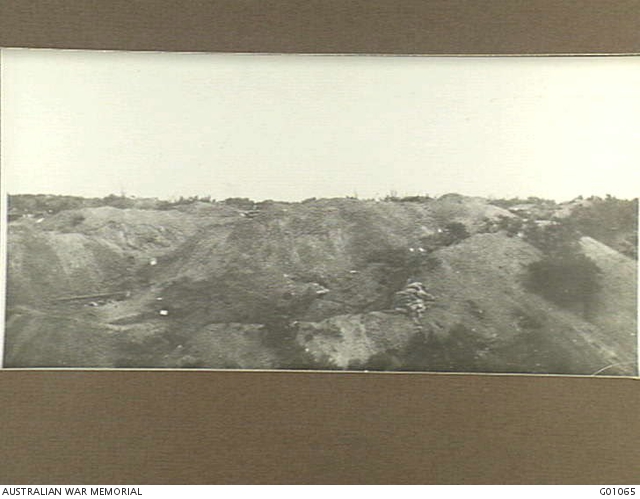 A view of Silt Spur from Bolton's Ridge, on which the 7th Battery were located, October 1915.
[Courtesy of Australian War Memorial - G01065]

It was cool with very fresh winds. One could tell the difference in the seasons as every person you came across was well wrapped up. I ascertained that both Cyril V & Cyril Kirkwood were away ill. In the afternoon visited Ordnance & met Stan Schooley on the way. He was in the Field Ambulance near Ordnance & we had a long talk & I promised to try & get along & have tea with him some afternoon if things were quiet. Coming back I had to run the gauntlet of shell fire and my assistants and I had to take refuge for some little time.

Observed that more wire entanglements had been erected on slope of PLATEAU 400 48-B-6, during night 12/13th.

1900 Work on alternative pit resumed + wall of No 3 pit rebuilt.

0830 Horses and Men behind RUINS on LT.SEC.OLIVE GROVE.

1735 A body of men att foot of OLD PARADE GROUND at right of WHITE RUIN.