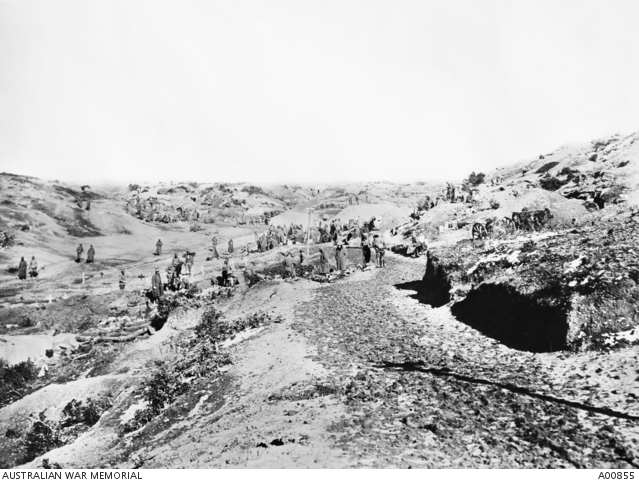 It was sultry to-day & threatened rain in the morning. Just near my quarters a position is used as a Grave-yard & those killed in the trenches just in front are carried to the rear & layed away. Several killed yesterday were buried early this morning. It certainly looks as if the [illegible] season is here – it’s what we have dreaded. The heavy black clouds hung about very ominously all the morning and about noon the sea was obscured from view & the echo of distant thunder the first I have heard since leaving dear old sunny Qld. It came over the hills. The wind also rose and with it came the rain. I had to go to Ordnance & just at the present I am sitting in my dug out store catching the drops of rain which are oozing through & waiting for the squall to abate.

It fined up & I went to Ordnance.

1610 No. 3 gun fired 6 rds. PS + 2 HE at mud brick parapets and wire entanglements on crest of PLATEAU 400, N. end of SURPRISE GULLY 68-B-6 in retaliation for enemy gun firing on LONESOME PINE.  Range 940x.  A portion of parapets was knocked down, but little damage done to entangle entanglements.

1900 Work on alternative pit continued + wall of No. 3 pit, which had been partially knocked down by Turkish shelling during the afternoon, rebuilt.  One of the No. 3 working party – No. 1737 Gnr. Haseman W. was slightly wounded under the armpit by a bullet while working on the outside of the pit.

There was more than Turkish rifle fire than usual right through night of 11/12th.